A few companies like Tesla and Block Inc are well known for buying Bitcoin and adding it to their balance sheet. These companies are also well known for their charismatic, yet eccentric leaders. But there’s a slightly smaller company that should be included with these two. This company has been buying Bitcoin even more ferociously and also has an outspoken leader. This company is MicroStrategy (Nasdaq: MSTR), which currently owns over 129,000 Bitcoins as of Q1 2022. The company even took out a Bitcoin-backed loan so that it could buy more Bitcoin. Now, Bitcoin is down to its lowest level since 2021. Let’s examine what this means for investors that own MicroStrategy stock.

Check out this article if you need a refresher on investing in Bitcoin. 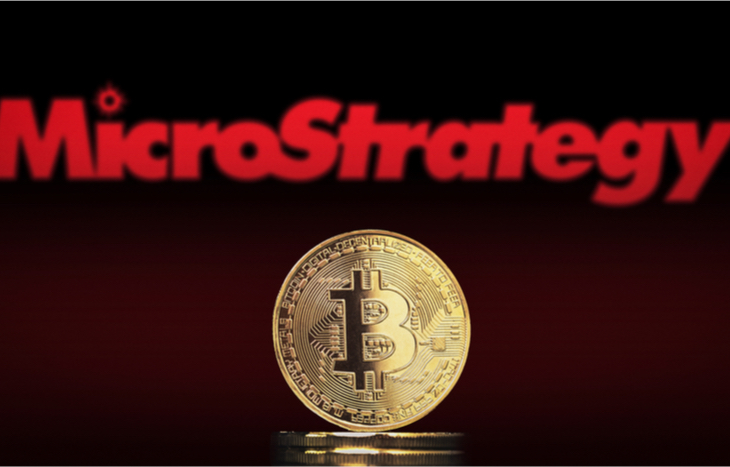 MicroStrategy Inc offers business intelligence, mobile software and cloud-based services. Michael Saylor started the company in 1989. It’s worth noting that investors sued the company for fraud during the 2000s Dot Com Bubble. The charges accused MicroStrategy of misreporting its earnings for a period of two years. Before the suit, MicroStrategy stock rose from $7 per share to $333 per share. Afterward, it crashed to $120 per share. The company agreed to settle without admitting to any wrongdoing.

More recently, MicroStrategy reported a 2020 annual revenue of $510.76 million as well as a net loss of $535.58. 2020 was also the first year that the company started buying Bitcoin. In fact, most of MicroStrategy’s 2020 net loss is due to a decline in the price of Bitcoin.

On that note, let’s take a closer look at MicroStrategy’s Bitcoin position.

How much Bitcoin does MicroStrategy Stock Own?

You can’t examine MicroStrategy stock without talking about Bitcoin. In fact, almost all of the company’s press over the last two years is Bitcoin-related. Its business intelligence services have become an afterthought. This makes the recent drop in Bitcoin’s price a concern for shareholders.

Bitcoin is now hovering around $31,600. This is slightly below the average price that MicroStrategy paid per Bitcoin. On paper, MicroStrategy is now showing an unrealized loss for its Bitcoin holdings. However, the bigger problem is the loan that MicroStrategy took out to buy more Bitcoin.

In its most recent earnings call, MicroStrategy management stated that it could face a margin call if Bitcoin’s price falls below $21,000. A margin call is when the lender demands its money back. If MicroStrategy gets margin called, it could be forced to sell its Bitcoin at a loss to repay the loan. If Bitcoin keeps dropping in price, things could get ugly very quickly.

Even though investors might be worried, CEO Michael Saylor isn’t. He made it clear that the company can survive much longer without selling Bitcoin. By his estimates, Bitcoin would have to fall to under $4,000/coin before MicroStrategy would b forced to sell. This is because MicroStrategy has lots of other Bitcoins that they could use as collateral for another loan.

So, with all this in mind, is this a good time to be buying into MicroStrategy stock?

Should you Buy MicroStrategy Stock?

At this point, buying MicroStrategy stock is essentially just buying Bitcoin. CEO Michael Saylor has made his initiative clear. He is going to buy up as much Bitcoin as he can. And, if the price dips, he will buy up even more. If you need convincing, just visit Michael Saylor’s Twitter account. It’s pretty much a non-stop stream of pro-Bitcoin tweets. For example, this is his pinned tweet:

“Bitcoin is a swarm of cyber hornets serving the goddess of wisdom, feeding on the fire of truth, exponentially growing ever smarter, faster, and stronger behind a wall of encrypted energy.”

It’s also clear from his Twitter feed that Michael Saylor is obsessed with Bitcoin. The only time he tweets about MicroStrategy is when it’s related to Bitcoin. At this point, it seems like Michael Saylor is using the company as his personal bank. Additionally, there is one other factor to consider.

Investors sued MicroStrategy for fraud during the Dot-Com Bubble. Keep in mind that Michael Saylor was still in charge back then. Even though that happened two decades ago, it should still be a red flag for anyone looking to invest.

During the Dot-Com Bubble, MicroStrategy essentially misreported its income. Due to this (along with general Dot-Com hype) its stock soared. Then, after the accusations, the stock came crashing back down. It’s easy to see a similar situation happening in the 2020s but with Bitcoin.

For this reason, it’s probably best to just own Bitcoin yourself instead of buying MicroStrategy stock. If you are still hesitant about cryptocurrency then it’s probably best to only invest a small percentage of your portfolio. This would mean anywhere from 1-5%. If this still seems too risky then there is nothing wrong with avoiding Bitcoin altogether!

I hope that you’ve found this article on MicroStrategy stock to be valuable! Please remember that I’m not a financial advisor and am just offering my own research and commentary. As usual, please base all investment decisions on your own due diligence.