How Will the Presidential Election Affect the Stock Market?

With the upcoming presidential election just weeks away, many people are wondering how the stock market will be affected. Does it matter which candidate wins? If it does, how much and in what way?

The short answer is no. It won’t matter.

There could be some short-term fluctuations and volatility. But regardless of who wins the presidency, you shouldn’t worry that it’s going to change the long-term trajectory of the stock market, at least according to Investment U’s Senior Macroeconomic Analyst Matt Benjamin.

But why is this the case? Shouldn’t something as monumental and consequential as the presidential election affect stock market returns? And if not, how do you know what to do with your money? 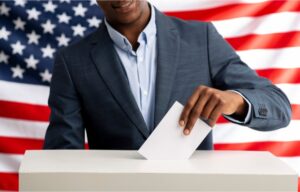 Presidential Elections Matter – Just Not for the Stock Market

Of course, I’m not saying that elections don’t matter – far from it. Elections have monumental consequences both for our nation and the world at large, and I would never dispute that.

The point that Matt Benjamin is trying to drive home, however, is that presidential elections do not matter for the stock market. Like I said previously, there may be some short-term volatility, but as the rest of the year and beyond unfolds, the current election will have minimal impact on your investments.

On the surface, however, this doesn’t seem to make any sense. How could the President of the United States not affect the stock market in the long run? Isn’t this person running the whole economy?

Again, the short answer is this: not really as much as you might think. Yes, there are domestic economic factors that the president can have some influence over, but there are many other factors besides the president’s decisions that matter too. And these can matter more.

But what about the common notion that the economy does better under the GOP because Republicans are pro-business and anti-tax? Surely, that must mean that the stock market will do better if the Republicans win this presidential election.

Does the Stock Market Do Better When a Republican Wins the Presidential Election?

He also shared this chart, which I love: 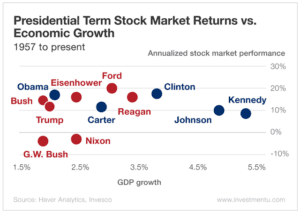 As Matt says, we’ve seen a pretty mixed bag of stock market returns based on which party has a president in office. Republican Gerald Ford had the best result, with an excellent annualized return of around 20%.

But the market didn’t do nearly as well under fellow republicans George W. Bush and Richard Nixon, when it provided negative annualized returns during their years in office.

Ike Eisenhower, a Republican (one of my favorite Republican presidents of the 20th century, by the way), and Ronald Reagan both come in behind Democrat Bill Clinton, while the most up-to-date statistics have Democrat Barack Obama (12.4%) just behind Republican Donald Trump (13.9%).

So when we set aside our political biases, we can see clearly that there is great variation among the presidents when it comes to stock market returns. And as you can see, it doesn’t break down by party. Not even close.

How to Play the Election Cycle

When it comes to the stock market and the presidential election in the short term, anything, as they say, is possible. We don’t even know whether there will be any more debates prior to Election Day on November 3.

Here’s what we do know: In the long term, the stock market is the best place to keep your investments because it will earn you the highest returns at an acceptable level of risk. The stock market almost always outperforms in the end.

So when it comes to where you keep your money, you should stay the course no matter who wins this election. The election may take the market for a ride in the short term, but in the end, as long as you keep going with your long-term strategy, you should do just fine.

Of course, if you want to consider some short-term Election Day stock plays, we have some recommendations for the best stocks in an election year.

And if short-term trading is your thing, I definitely recommend you subscribe to the free Trade of the Day e-letter in the subscription box on this page. The team will have you covered on how to play the stock market during the presidential election and every other trading day too.