The 3 Most Exciting Satellite Stocks to Buy

Satellites are one of mankind’s most impressive achievements. They get blasted into orbit and offer tons of uses. For example, satellites help us observe the weather. They can also help you get TV in your home. Most importantly, satellites help people all over the world communicate with each other. Over the coming decades, satellites will continue to play a bigger role in society. Due to this, many investors are on the lookout for the best satellite stocks to buy.

As you might imagine, starting a satellite company is intensive. It’s much more complicated than opening a boutique. First, you need to design the satellite itself, which takes research and know-how. From there, you have to launch it into space. This requires money and even more know-how. Finally, you have to monitor and maintain the satellite. From start to finish, the entire process is fairly intensive. However, once satellites are successfully in orbit, they instantly play a crucial role in society. Accordingly, the companies that are able to conquer this process can become incredibly successful.

With that said, let’s take a look at the three most exciting satellite stocks to buy. 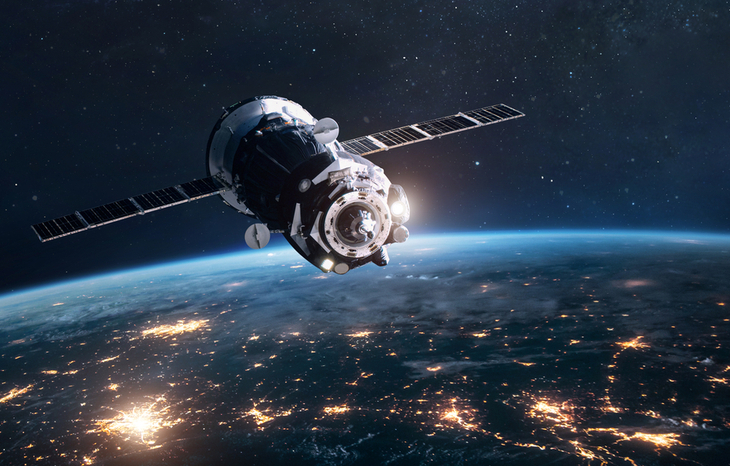 The first satellite stock to buy is Maxar Technologies. Maxar is a space technology company. It has solutions for communication, observation and radar. As you might assume, Maxar has its hand in a number of projects.

Maxar has quite an impressive resume of work. In total, it works with 50 different governments including the United States, Japan, and Australia. Notably, it provides 90% of geospatial intelligence to the U.S. government. Maxar also claims that almost half the world’s population “interacts” with Maxar tech each month.

On the commercial side, Maxar works with Google, Amazon, Uber, Palantir, GM, Lockheed Martin and more. It’s a little difficult to commit to just one prediction for Maxar. This is because Maxar’s tech is used in plenty of growing industries. To name just a few industries, Maxar tech is used for autonomous vehicles, the metaverse and robotics. As these industries grow, Maxar should grow alongside them. As far as satellite stocks go, it’s a bit of a jack-of-all-trades.

One of the most common uses for satellites is to provide internet connection. Almost everything you do on your cell phone (call, text, social media) is made possible by a satellite. However, there is still one place that the internet is not readily available… airplanes. This is what makes this next company one of the best satellite stocks to buy.

Gilat Satellite Networks is an Israeli company. It offers solutions for broadband, the internet of things and government services. Looking forward, it hopes to be a major player in providing mobile connectivity. This means offering Wi-Fi on trains, boats and planes, making it one of the best satellite stocks to buy.

Get Ready For In-Flight Wi-Fi

We’ve come to expect public Wi-Fi just about everywhere we go. Whenever you visit a public place, there is a very high chance that it will have internet. This is true for airports, coffee shops, hotels, restaurants and even public transportation. However, one place that’s left off this list is airplanes. It’s easy to assume that penny-pinching airlines withhold this perk. Why give Wi-Fi away for free when they could just charge another $15?

In reality, the first generation of in-flight Wi-Fi just isn’t equipped to handle 100+ internet connections. This is especially true for longer flights. The Wi-Fi system would most likely crash. It could also get incredibly laggy, which would frustrate passengers. Luckily, many airlines plan to transition to the second generation of in-flight Wi-Fi. This new Wi-Fi network will be powered by satellites. This system will give passengers faster connectivity and a better flight experience.

JetBlue is one of a few carriers that already offers free Wi-Fi on each domestic flight. Most other major airlines have stated that they plan to join. This list includes Delta, American Airlines and United. You’d have to imagine that this is a domino-style situation. Once the technology is readily available, one airline will choose to offer free Wi-Fi. This will be such an attractive perk that other airlines will be forced to follow suit.

Satellite-powered in-flight Wi-Fi could potentially be a huge moneymaker for satellite stocks. And Gilat in particular is in a great place to capitalize on this. In fact, it is actually the company that powers the most common in-flight Wi-Fi: Gogo. Gilat does a great job of outlining its advantages when it comes to offering internet in the air.

As far as satellite stocks go, Gilat seems to be well-diversified.

In 2021, Gilat generated annual revenue of $215 million. It also posted a net loss of $3 million. Gilat also recently landed a major contract to bring internet to six regions in Peru. This deal alone should bring in $550 million in additional revenue. The deal is comprised of $335 million in construction revenue and $215 in operational revenue (over 10 years).

This added revenue would provide Gilat’s bottom line with a significant boost. Additionally, Gilat also plans to be a major player in the 5G revolution. This is another rapidly growing market that could become a huge source of revenue for Gilat. If you’re interested in other 5G stocks in addition to satellite stocks, you can read more here.

The final company on this list of satellite stocks is called SpaceMobile. SpaceMobile is a satellite-to-smartphone broadband company called AST SpaceMobile. It has an incredibly lofty goal of providing 4G/5G connectivity to everyone on Earth. Regardless of whether you are on land, air or sea, you’d be able to connect to SpaceMobile’s network. It plans to do this by creating the world’s only satellite-only space network. This network will allow all Earth’s mobile devices to connect with satellites.

So far, the company has one test satellite in orbit called BlueWalker1. It’s planning to launch its first five commercial satellites in 2023.

Abel Avellan, SpaceMobile’s CEO, expects the company to be cash-flow negative for three years. It will spend the next few years assembling and investing in its satellite network. This requires building, launching, and monitoring satellites. SpaceMobile will start generating revenue once it has about 20 satellites in space. Avellan expects exponential growth after this base network is in place. He wants to reach 44 million users by 2024 as well as $1 billion in revenue. By 2027, he predicts that the company could be making upwards of $9.6 billion in annual revenue.

Are These Expectations Realistic?

Once its network is in place, the transition to SpaceMobile could be a no-brainer for consumers. Who wouldn’t want a cell plan with spotless coverage around the world? But, just like spider-man, lofty predictions come with lofty expectations. If everything goes smoothly SpaceMobile could dominate the industry. However, this is a big if. Avellan is hardly the first CEO to make headlines with bold aspirations. More so than other satellite stocks, there are a few risk factors here.

Mainly, NASA has stated that SpaceMobile’s satellites are too big. They could pose an “orbital debris threat.” In general, NASA does not oppose many projects. So this is a reason to believe that this risk might have some merit.

Additionally, SpaceMobile has already pushed back the launch of its commercial satellites to 2023 due to supply chain issues. At the least, I would anticipate Avellan’s forecasts to take longer than expected.

On the bright side, Abel Avellan is quite a charismatic leader. He responded to NASA by stating “we’re not a bunch cowboys launching satellites.” He also stated, ‘“I have not made a lot of noise about this project, because I did not want China to start copying it too early.”

Abel Avellan seems to have a lot of confidence in his idea, himself and his team. Another good sign. Avellan sold his previous company, Emerging Markets Communications, for $550 million. He also owns 22 patented technologies.

I hope that you’ve found this article valuable when it comes to learning a few of the best satellite stocks to buy. Please base all investment decisions on your own due diligence and risk tolerance.