Short-term stocks are those that are held, by definition, for less than a year. If you hold for longer than a year, it becomes a long-term stock.

Sometimes you find a stock that’s lookin’ juicy. You do some research and determine it’s going to rise for a few months then fall again. Maybe you already bought in, and it’s starting to become bearish. If you bought in a couple months ago, and don’t think it’s going to hit these numbers again for a long time? You might want to consider selling.

Overall, short-term trades can be a nice way to make some quick money.

But a warning: Trying to time the markets is what gets a lot of new investors in trouble. It can be easy to jump on the bandwagon when you see a high price. But if you buy in, the stock might go down and take your investment with it. So be careful, and do your due diligence before investing. 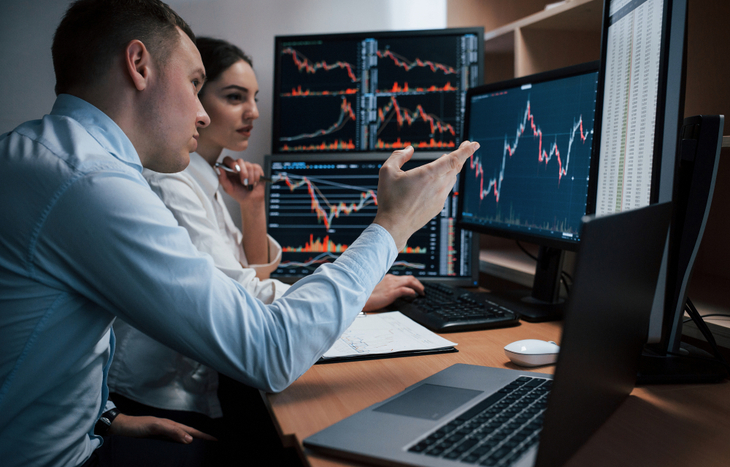 Cinedigm has recently made a deal with Hallmark.

It’s going to be the first company to distribute digital copies of the Hallmark channel’s content. Moms and grandmas will be all over that this Christmas.

Not only that, but more families may start adopting Hallmark’s movies and shows. Which means it’ll tap into a market that’s similar, but not quite like what it’s been doing so far.

Also, Cinedigm is a penny stock right now. It is trading low compared to what it did many years ago. So, if you get in now, you might see massive return to those higher levels.

If you’re looking for small stocks with big potential, check out these penny stocks.

Xpeng is one of the best short-term stocks backed by a huge investment trend. It’s a Chinese electric vehicle manufacturer. It also just launched a flying car concept for the air and the road. There are even some people amazed that Xpeng did this before Tesla.

It already has plans to mass produce and make it available to consumers by 2024. And the price for one is estimated to be only $157,000. That’s a high price for a car, and pennies for a helicopter.

The stock is up, and if it follows through with this, it’ll keep going. If the product it creates is quality, it’ll go even higher than that. We’ve dreamt about flying cars for decades, and now that concept is one step closer to reality.

There are other things to think about with this market. Like, “Is there demand for this product?”

Revenue is up by over 500% compared to last year’s Q2. The company isn’t yet profitable but it’s growing rapidly. Profitability should follow in the years ahead.

If you’re looking for more EV stocks, check out that link. Here are some EV charging station stocks as well. It’s a powerful trend that has some great investing opportunities.

The chip shortage is creating a strange phenomenon. Since there’s a chip shortage, there’s a “new car” shortage of sorts. When I say “shortage,” I mean there are millions of brand-new cars and trucks sitting in huge parking lots. They cannot be sold by retailers because they don’t have the chips yet.

I saw this for myself a few months ago. Millions of 2022 brand new trucks in a single parking lot covering about 10-15 acres. It’s pretty incredible.

There’s pent up demand, so people are turning to used cars. This is because the new cars that are available are high in price.

So, there’s more demand for used vehicles, which is jacking up the price of those, too. Demand for used cars is at an all-time high right now.

Lithia Motors is the third largest auto retailer in the U.S. Its stock is looking healthy, with large increases since last year. Plus, it might rise even more, since Lithia reported profit and revenue well above the forecasts. This makes it one of the top short-term stocks to trade.

Teck is a diversified natural resources company. It’s engaged in mining and mineral development. It also deals with coal, copper, zinc and energy.

The stock has been climbing like crazy since March 2020. It’s gone up by more than 300% since then.

And the Q2 financial report looks great, too. There was over a 200% increase in net profit margin from last year. Both revenue and net income were up from last year as well, up roughly 50% and 270% respectively. Those are some mighty fine numbers.

Urban Outfitters is a retail multinational lifestyle brand. Its financial report has some nice numbers which makes it a great short-term stock. Q2 revenue was up by 44% and net income was up by close to 270%.

The stock has grown a lot since April 2020. Although, it’s corrected downward over the past two months. So, you can buy in at a lower price than before. From a valuation standpoint, its P/E ratio comes in at 11.

NVIDIA is an American multinational company. It designs graphics processing units and chip units. It caters to the gaming, professional, mobile computing and auto markets.

NVIDIA’s stock looks great, with heavy growth in 2020 and 2021. Year-to-date, it’s up close to 100%. Even at an all-time high, it might be worth buying into. The gaming industry and technology in general is fast-moving. Check out these video game stocks.

Finances look good for NVIDIA. Revenue is 68% higher than it was last year for Q2. Net income rocketed 280% higher.

NVIDIA’s company touches many different markets. Which makes it much more stable than a tech company that’s solely catering to gaming or another single industry.

Short term investments are wonderful if you want to have a chance at making some “quick” money. By “quick,” I mean in a few months rather than a few years. But you want to make sure the company’s stock will be increasing soon. It’s important to do research, as always.

Sometimes short-term stocks turn into long-term investments. And if they do that, it can be a good thing. If they keep going up, you won’t want to take your money out.

But eventually, they’ll come back down. And when they start to break out of that bull cycle, it’s good to get out. As my dad always says, pigs get fat and hogs get slaughtered. Do your due diligence, and don’t be a hog.

If you’re looking for even better trading insights and opportunities, sign up for Trade of the Day below. It’s a free e-letter that’s packed with tips and tricks from trading experts.