Video game stocks have come a long way. From the earliest days of pong to today’s most sophisticated virtual reality gaming, video games have captured the attention of the public for decades.

Video games reach almost every single demographic and it’s relatively safe to say that everyone has at least one video game that draws them in. For hardcore gamers, this might be playing Call of Duty online. For sports fans, it might be NBA 2k or Madden. For corporate clock punchers, it could even be online solitaire or pinball. For me personally, it’s Super Smash Bros. and Mario Kart.

Since video games are so beloved, it should be no surprise that the global video game market was valued at $151 billion in 2019. This number also most likely spiked in 2020, where people were forced to stay indoors for hours on end. With little else to do, video games were an obvious choice to pass the time. Due to this, one video game CEO believes that the total addressable market (TAM) for video games will be larger moving forward than it was pre-Covid.

So does all of this mean that video game stocks should be a key piece of your portfolio? Maybe!

Let’s take a look at some of the top video games stocks to buy. 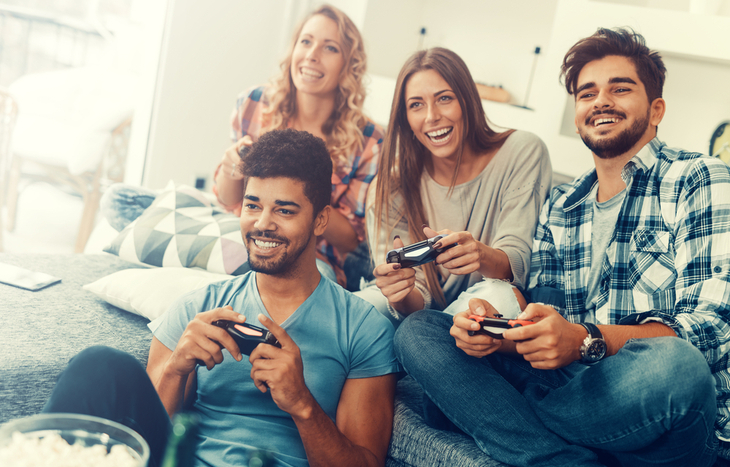 When looking at the top video game stocks to buy, there are three major players in the industry. The third-biggest by revenue is NYC-based Take-Two Interactive Software. Take-Two owns two major publishing labels, ROCKSTAR and 2K. Between these two labels, it owns the rights to popular franchises like:

Notably, it recently hired 700 new developers to bring its total team of game developers to over 5,000. It is also currently sitting on $2.7 billion in cash and short-term investments. This will give it the structure that it needs to meet its ambitious goal of churning out 20 new titles per year for the next several years.

When you combine popular franchises with financial results, it’s no wonder that Take-Two Interactive software made the list of video game stocks to buy.

The second-largest publicly traded video game company by revenue and market capitalization is Electronic Arts (“it’s in the game!”).

A few of EA’s most popular titles are:

In 2020, Electronic Arts pulled in revenue of $5.54 billion and netted a total income of $3.04 billion. In the most recent quarter, its revenue has grown at just over 5% year-over-year.

In June 2021, Electronic Arts acquired Glu Mobile which shows that it’s aggressively expanding into mobile games. This acquisition aligns with its push to bring its most popular titles to mobile gamers. It’s already announced that it’s bringing FIFA, Madden, UFC and NBA Live to mobile and will likely keep bolstering its mobile offerings over the coming years.

A few of Activision Blizzard’s most popular titles are:

Activision Blizzard brought in a 2020 revenue of $8.09 billion and a net income of $2.2 billion. Over the past five years, its revenue has grown by an average of 13.05% annually. It has also consistently paid a dividend since 2010 and currently has a dividend yield of about 0.6%.

The three main profit drivers for Activision Blizzard are Call of Duty (Activision) and Warcraft (Blizzard). In Q2 of 2021, Activision brought in $789 million while Blizzard generated $433 million. King, who derives most of its income from Candy Crush and Farm Heroes, brought in $635 million. It’s also notable that all three of these companies enjoy fairly cushy operating margins of 46% (Activision), 33% (Blizzard) and 39% (King).

Those are the three largest video game stocks in terms of revenue and market capitalization. However, there are still a few other video game stocks to take a look at. Namely, the creators of my favorite games.

Also, before we dive into more gaming stocks, you might want to check out these VR stocks. Virtual reality is opening up doors for unique gaming opportunities. Investing early might lead to some big long-term returns.

Nintendo first gained major recognition when it released Donkey Kong in 1981. This success was closely followed by Super Mario Bros in 1985. Since then, Nintendo has released some of the most successful gaming consoles of all time such as the Game Boy, Nintendo, Nintendo DS, the Wii and the Nintendo Switch.

Some of its most popular franchises are:

In 2020, it reported revenue of just under $12 billion and a net income of $2.35 billion. In recent years, it has also had major success in boosting its top line. Its revenue has been growing at a rate of 34% annually over the past five years.

More so than most other video game companies, Nintendo seems to have an “it factor” that allows it to outshine others at certain times. For example, while the Xbox 360 was still an incredibly popular gaming console, it didn’t quite capture the attention of the public that the Nintendo Wii did. The 360 also ended up falling short of the Wii in terms of consoles sold.

Another example is the global phenomenon of Pokémon Go. For a brief period, it was commonplace to see people wandering around aimlessly on the hunt for virtual Pokémon.

This is encouraging news since COVID-19 and computer ship shortages put a lot of strain on Nintendo’s supply chains. With its recently acquired excess cash, Nintendo is instituting a stock buyback. It hasn’t announced how it’s planning to invest the rest of its excess cash yet.

Which Video Game Stocks to Buy?

So far, this article has been quite a bit to digest as there are tons of moving parts. Some companies create mobile games only, some create games for Xbox, others create gaming consoles. With so much going on, how are you supposed to know which video game stocks to buy?

After doing some digging into these video game stocks, the main strategy with video games seems to be this:

Create video games until you find a game and characters that resonate with people and then pump out as many sequels as possible.

For example, Activision struck gold with Call of Duty (CoD), which was (and is) incredibly popular. Today, there are currently 24 Call of Duty games and eight CoD games focused on World War 2 alone.

Nintendo has done the same thing with its cast of characters. The original Mario Kart came out in 1992. Can you guess what just came out 29 years later for the Nintendo Switch? Another Mario Kart game. This brings the total number of Mario Kart games on the market to 14. It also goes without saying that there’s a new Madden, NFL, FIFA or NBA game every single year to account for updated rosters.

Due to this, the best strategy for finding a video game stock to buy is probably to do your best to monitor what video games are rising or falling in popularity. If you notice a significant trend then you can buy or sell the video game stock accordingly. For example, if you notice that World of Warcraft is starting to fall out of favor rapidly in favor of another game then this could put a significant dent into Activision Blizzards’ revenue and hurt its stock price.

Another ongoing trend is the Name, Image and Likeness bill that Congress passed for college athletes. College athletes are now able to profit off their name and likeness. So, will this lead to a resurgence in the incredibly popular NCAA football games? That would certainly be a profit-driver for whichever company owns the rights. Only time will tell!

Note: One of the most popular video games right now is Fortnite. Fortnite is owned by Epic Games, which is a privately held company.

Another Note: Netflix recently announced that it’s planning to offer video games in the next year or so. It’s brought on a veteran from EA and Facebook to lead this division.

I hope that you’ve found this article valuable in learning what the best video game stocks to buy are! As usual, all investment decisions should be based on your own due diligence and risk tolerance. Also, consider checking out my research on the best VR stocks.

To find even more investing opportunities, sign up for Profit Trends below. It’s a free e-letter that’s packed with tips and tricks. You’ll hear directly from investing experts.