The Telcoin crypto (TEL) started off with a disruptive mission. This isn’t unique, per se. The teams behind lots of altcoins have visions of changing some aspect of the world. But that vision is often steeped in delusion and/or fantasy.

Telcoin very well could have fit into the delusional narrative not too long ago. After all, the team set out to compete with the likes of major banks and Western Union in the remittance market. That’s a major nut to crack. And even more difficult to dethrone the kings of the market. But this coin has made some major strides this year… In fact, its value alone is wildly outpacing the red-hot crypto market as a whole. 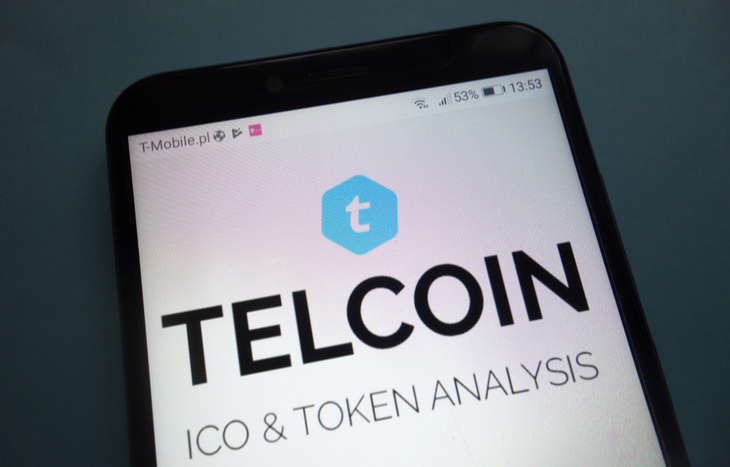 Year to date, Telcoin is up some 30,000%. That could be seen as an almost normal figure from some new initial coin offering. See SafeMoon and Elongate. But Telcoin has been on the scene for a while. This isn’t just some upstart with a clever marketing strategy that’s being used to garner interest. It’s been around since 2017. And by all appearances, the team’s long-view tactics are beginning to pay off. Both for its investors and in terms of adoption.

Why Telcoin Crypto Is Spiking Now

Telcoin crypto recently spiked to an all-time high of $0.59. This is pretty big news. It hadn’t traded for more than a single cent since January 2018. And between then and now, it has spent the lion’s share of that period trading at a hundredth of a cent or less. But the times, they are a-changin’.

It’s worth noting that the Telcoin crypto hasn’t been a big beneficiary of the various crypto booms. It’s kept its head down and seemingly focused on the big mission and projects at hand. Namely, trying to figure out a way to make remittances a whole lot easier and cheaper.

This was never going to be a simple task. Not only is there a lot of opposition in the way, but there are a lot of regulations to overcome. And they haven’t all been overcome yet… not by a long shot. But there have been some breakthroughs worth noting.

Most recently, the Nebraska Legislature advanced beyond the committee stage a bill that would allow institutions that connect consumers to each other (which have been mostly remittance companies) to bring crypto and decentralized finance into the equation.

This is the kind of thing Telcoin has been hoping for. And if it proves to be a catalyst for change, Telcoin may very well be starting to move the needle.

Additionally, the Telcoin crypto team has announced a remittance service to help the transfer of funds between Canada and the Philippines. Again, these are the kinds of projects that can help propel the coin into mass adoption. And adoption has never been easier.

How to Buy Telcoin

There have been live Telcoin crypto markets on several exchanges for a while now. In the past, you could pick up Telcoin on KuCoin, Uniswap and Balancer. This has made it fairly straightforward to invest in the coin for a while.

But the Telcoin team recently announced that it has been added to the QuickSwap decentralized exchange. The news of the QuickSwap listing definitely played a role in pushing up Telcoin’s value because this exchange operates on the Polygon protocol, which has lower fees. Additionally, the Polygon network offers appealing yield opportunities for liquidity providers on QuickSwap. So investing in Telcoin has gotten a lot easier and cheaper and, in turn, more profitable… which has naturally pushed up its value.

The Bottom Line on Telcoin Crypto

The global remittance market was valued at more than $682 billion in 2018. Helping foreign migrants transfer money to their home countries is big business. And it’s got a lot of room to grow. It’s anticipated that the market will reach $930 billion by 2026.

Banks are projected to remain dominant in this market. But now that there’s increasing competition, that could change. Because being able to send money home right from your phone is a whole lot easier than going to the bank. And with Telcoin, transfers are virtually instant. The network is as secure as a bank. And Telcoin transfers are largely cheaper. The average cost of sending a remittance is more than 7%. Telcoin is working on getting its fees below 2% – which isn’t an insignificant difference.

And again, being able to send a remittance right from a phone is astronomically simpler. There are nearly five times more mobile phones than active bank accounts around the world. But right now, people are still lining up at banks and Western Unions to send remittances back home to family members. But with its iPhone and Android app, Telcoin crypto hopes to change all of that… which makes this a very interesting crypto to invest in – especially if it’s able to successfully disrupt the remittance market.

Are you interested in other cryptos shaking up the markets? We suggest signing up for Manward Financial Digest. In it, Manward founder and crypto expert Andy Snyder uncovers investment opportunities of all stripes, including the ever-volatile crypto markets.