Splitsville has a new resident by the name of Tesla (Nasdaq: TSLA). But unlike celebrity breakups, the Tesla stock split has an impact beyond making the cover of checkout aisle gossip magazines.

The electric vehicle maker’s board approved a 5-for-1 split of the company’s stock. This is newsworthy for two major reasons. One is that stock splits have grown much less common in recent years… due at least in part to the fact that high stock prices are a badge of honor. The other reason is that the announcement of the stock split triggered a substantial boost in share price. 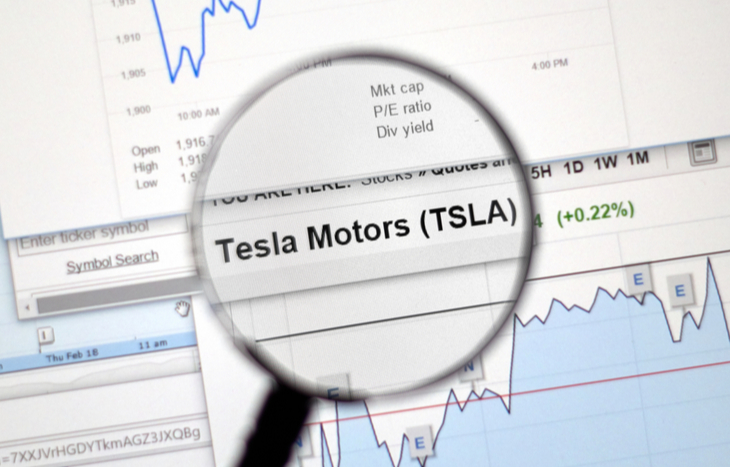 Tesla’s stock price has been on a roll the past couple of years. And another catalyst for upward movement is sure to grab investors’ attention. And possibly that of the markets as a whole.

It’s been four years since Elon Musk sent the tweet heard round the world. Since the announcement that he was considering taking Tesla private at $420 a share, the stock price has jumped considerably.

Nonetheless, Musk’s reputation as an enfant terrible has kept many investors at bay. And Tesla continues to get a lot of attention from short sellers. But the upcoming Tesla stock split could help change the minds of institutional naysayers. It could also create a cascading effect, making the idea of stock splitting more appealing.

Tesla’s Stock Split by the Numbers

Any and all publicly traded companies have a set number of shares available. And there are only a few ways that number can fluctuate. The first is when the company announces it’s buying back some of its shares. Another is filing a request to sell additional shares. Then there’s the decision to split the stock and issue additional shares to current shareholders.

From a mathematical standpoint, a stock split shouldn’t make a difference. All it does is splice the same asset into smaller parts. So in the case of Tesla, there are 186.36 million outstanding shares. But after the markets close on August 28, each shareholder will receive a dividend of four additional shares. This will boost the number of outstanding shares to 931.8 million when the markets open back up on August 31.

This increase will naturally reduce the price of individual shares. But this also boosts the liquidity of shares. That makes them more accessible to individual investors… even though the value of the company stays the same.

In fact, the split could actually increase the value of Tesla. Here’s why…

When Tesla’s stock split takes place and the price of shares goes down, they’ll be more affordable. This can make them much more appealing to small investors. And if small-time retail investors find the stock more appealing at a lower price, it can increase demand and drive prices back up.

And by all accounts, that’s exactly what Tesla has in mind with this stock split. It even went so far as to state that the move was to “make stock ownership more accessible to employees and investors” in a press release.

Typically, a stock split takes place when the rise in share price has outpaced other companies in its sector. And this is certainly the case with the Tesla stock split. In fact, even after the share price is watered down, Tesla will still be trading at a much higher price than competitors like Toyota (NYSE: TM), Volkswagen (OTC: VWAGY) and Nio (NYSE: NIO).

The move to split a stock is also seen as a vote of confidence in the future direction of the stock. And that sense of optimism is understandable right now. Tesla has reported profits for several consecutive quarters. That’s a first for the company. This was thanks to steady vehicle sales, as well as the sale of regulatory credits to other automakers.

The simple answer is that only you can decide if Tesla makes sense to add to your portfolio in light of its stock split. The consensus among analysts is that Tesla is overvalued. But that’s been the case for a good while now. And Tesla will probably continue to baffle experts for the foreseeable future.

But if you were on the fence, unfortunately you’re out of time. Only shareholders of record as of August 21 will receive the four-share dividend. And on August 31, trading on a stock split-adjusted basis will begin. But there’s still time to take advantage of the dip in price after the split. So what it really boils down to is your risk tolerance.

If $865 per share is too rich for your blood, fret not. There are plenty of other stocks in the sea. And if you need some help figuring out the right stocks for you, we’ve got a simple explainer right here.