The Waves Crypto Coin Is Up. But Investors Should Be Cautious

The crypto markets are showing signs of resiliency. Most major tokens are up. Even if most are still far from their 52-week highs. However, Waves crypto is even hotter right now. Right around midnight on May 30, there was a rapid rise in trading volume of this token. Buyers seemingly came out of the woodwork.

In turn, the Waves crypto token shot up in value by roughly 60%. But before investors start proclaiming that crypto’s back, we suggest a modicum of caution. Crypto as a whole is still down. And markets are still recovering from Terra Luna disaster. And rightly so. When one of the most watched experiments in DeFi crashes, it can scare off a lot of potential investors.

That being said, the fault of what happened with Luna doesn’t rest on the shoulders of the entire cryptosphere. But it is a warning sign nonetheless. But more specifically, that warning should be directed towards stablecoins. More traditional cryptocurrencies not pegged to an underlying asset are less vulnerable to the sort of manipulation Terra Luna faced. 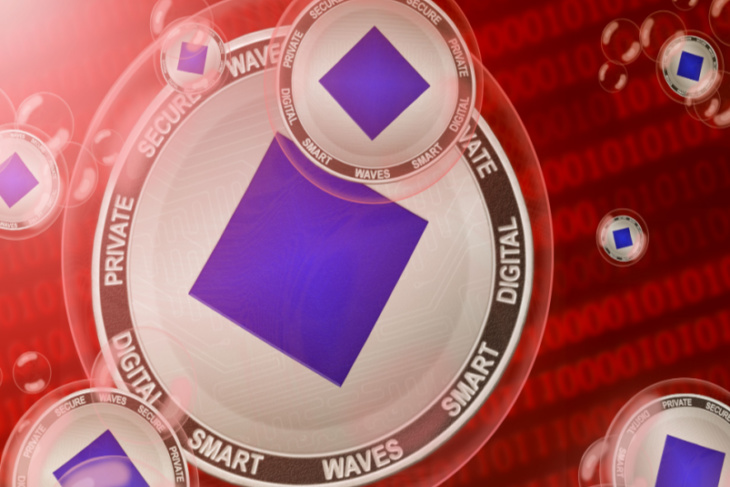 The Waves stablecoin, Neutrino (USDN), was proven to not be immune to this issue. Its stablecoin was also recently unpegged. This led to a major liquidity situation. However, the stablecoin has nearly recovered after proposals from the Waves crypto community were enacted. This could be seen as reassuring after such a setback. However, in this case, there might be a big pump that could lead to a dump in the near future.

Without getting too deep into the inner workings, Waves is basically a decentralized blockchain platform focusing on custom blockchain token operations. One of its major strengths is operating an incubator for other tokens. It has lots of other tricks up its sleeve though too.

Waves crypto acts as the native token to this blockchain. Here, the token can be used to power decentralized apps, run the Waves protocol and deal with transaction types and fees. If you want to dig a little deeper, you can check out the whitepaper here.

For all of this Waves crypto is a very important token. But it seems unlikely that there has been a sudden surge in any of these activities to warrant a 260% increase in trading volume. This is why we think the rapid rise in value of Waves crypto is likely a temporary one.

That being said, there have been events that could have spurred an increase in interest. Last week, the team behind Waves crypto unveiled its “master plan” going forward.

It was announced that efforts would be made to boost demand for the stablecoin USDN. Furthermore, the Waves founder announced he would take on the $400 million in debt personally. And certain accounts’ collateral would be liquidated to return liquidity. On top of this, special efforts would be made to control massive selloffs of USDN. This would keep major selloffs from being conducted in an instant. Instead, they will go forward slow, steady and controlled to keep USDN steady.

Not quite. The stablecoin looks to be eking back to where it should be. And that likely instilled confidence in some investors. A rise in value after an announcement like this can often spark the interest of investors. But the run on Waves crypto happened several days after the big announcement. That makes it a tad bit suspicious.

This project has been around for a while now. Waves was launched in 2016. But it didn’t really start gaining any traction until the mad crypto rush of late 2017. It saw similar spikes in 2021 when any altcoin out there was making big gains. But this project had yet to get the sort of attention from investors that would cause a 60% gain. And slapping a Band-Aid on a major problem for this project sounds unlikely to cause such a stir.

It looks like (and do know, this is only speculation at this point) some big investors took advantage of the master plan announcement. The sudden flood of buying activity that drove up the price of Waves crypto is likely to ebb just as fast as it flowed. And that could cause the value of Waves crypto to come crashing down just as hard.

The Bottom Line on Waves Crypto

If you were to look at a price chart of Waves crypto for the past month, you’d see it was highly unlikely it was headed for any upward momentum. That being said, crypto markets are wildly unpredictable. Even for those of us that have been studying them for years. So here are our thoughts on the future of Waves crypto, its blockchain and stablecoin…

The blockchain itself is robust. The last audit that was conducted on it pointed out some serious issues, which have been addressed. The stablecoin appears to be back on track after the fixes. But there’s still plenty to be cautious about there. Stablecoins in general have had a rough go of late. And this is a trend we suggest avoiding for the time being.

As for Waves crypto, our recommendation is simple. If a whale or two swooped in and bought up huge amount of the token to drive up the price, they aren’t likely to hold it for too long. If the token is still trading above the $8 mark a few weeks from now, this could be a legitimate recovery. And that would create a renewed sense of legitimacy to the rush on this token.

But as of right now, we suggest keeping your distance. It’s not because the project isn’t interesting. It’s not because we hold any fear of a rug pull. We’re just wary of the seemingly out-of-the-blue rise in value. It smells like manipulation. In the meantime, we suggest checking out the informative ask-me-anything with Waves founder Sasha Ivanov on Twitter Spaces to tide you over. And if Waves crypto is still trending upward at the end of June, then we’ll admit our skepticism was misguided. But still, better safe than sorry. Especially when most crypto portfolios are deep in the red.