What is the difference between rich and wealthy? At first, you might assume that there is no difference. After all, the two terms are often used as synonyms. Why assume there is a distinction?

But on closer inspection, the two terms begin to diverge. In fact, the two can be seen as entirely different concepts. Suddenly, being rich appears distinct from being wealthy.

In this article, I want to take a look at the difference between being rich and being wealthy. I think that by the end of the article, you’ll not only understand the difference, but you’ll also understand which one you want to be. 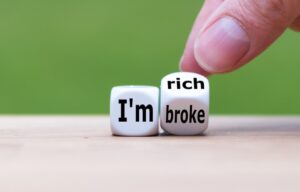 The Rich-or-Wealthy Debate – A Case Study: Celebrities Who Go Broke

Well, these celebrities may have been very rich at one point. But as hip-hop icon Dr. Dre once said, “Anybody can get it. The hard part is keeping it.”

Clearly, Dr. Dre, among his other talents, knows a thing or two about being rich versus being wealthy. We’ll get back to that in a moment.

The point here is that even if you become rich, that’s not an indicator that you will stay rich forever. For example, take Las Vegas musical sensation Wayne Newton.

Wayne Newton had a lot to say “danke” for in his career. But after many years of building one of the most famous Las Vegas lounge singing acts in history, Wayne Newton had a huge problem by 1992: He owed $20 million in debt and had to file for bankruptcy.

Another singer, one of my favorites, would do anything for love. But when it came to being wealthy, he wouldn’t do this. More specifically, Meat Loaf wouldn’t give credit to his songwriting partner, which resulted in a lawsuit that divorced Meat Loaf from all his riches.

Because he had partially built them on a house of cards – cutting out his partner rather than sustainably sharing the income – his riches were suddenly gone, like a bat out of hell.

That “here today, gone tomorrow” nature of being rich is tricky to escape. Now, let’s take a closer look at what we even mean by being rich.

Let’s get down to the nitty-gritty: What is the difference between rich and wealthy? First we need to define what these terms mean. Let’s start with “rich.”

In most people’s minds, being rich means two things:

As a former student of philosophy, I often talk about something called “necessary and sufficient conditions.” These conditions are looked at as requirements when defining a concept.

So as we define the word “rich,” I am claiming that the points above are the two necessary conditions for being rich. If you have both of those things, then congratulations – you are rich!

How Much Income Do You Need to Earn to Be Rich?

Okay, great!  We are now on our way to understanding the difference between rich and wealthy. But how much money does a person need to make to be rich?

Well, if you’re flipping greasy burgers for $10 an hour at your local Burger King or Popeyes, you definitely aren’t rich, income-wise. That’s probably also true for a starting administrative assistant making $30K per year plus benefits.

Is $100,000 enough? With that much income, you can certainly afford a mortgage payment, a car payment, and some luxuries like dining out and fancy entertainment consoles.

But maybe that’s not even enough to be really rich. Maybe you need to be earning $1 million or more. That must certainly be enough, right?

According to most Americans, the previous option was actually enough. Most Americans think that if you are earning more than $100,000, you are rich.

So if you’re making more than that, you must be really, really rich. Again, congratulations if that’s you! But let’s not forget the words of the visionary Dr. Dre: When it comes to being rich or wealthy, “the hard part is keeping it.”

The Hard Part Is Keeping It

The problem is that when it comes to being rich, all that matters is your income and how splashy your purchases are. Unfortunately, there’s more to money than income size and luxury goods.

There are also expenses and debt. Eek. You forgot about those, didn’t you?

Let’s say you earn $100,000 per year. You buy a lot of Gucci and Sony products. Perhaps a Lexus or a Mercedes. In the minds of most Americans, as we have previously seen, you are definitely rich.

But you’re also paying for those Gucci and Sony products. That means you’re spending large quantities of your hard-earned cash on expenses.

And if you are using a credit card or some other form of financing, you are most likely spending a lot of your cash on debt payments. Oh yeah, and let’s not forget about the mortgage, car loan or student loans you may have in addition to those.

Suddenly, your cool $100K per year may not seem so wondrously rich anymore. In fact, if you aren’t paying attention, you may soon realize that you are spending as much as you earn. Or more.

That’s not so great. In fact, it may soon kick you out of your kingdom of riches and land you in the proverbial poorhouse. Just like where poor Meat Loaf and Wayne Newton were for a time.

Being Rich vs. Being Wealthy: The Difference

We’ve seen that being rich can vanish in a moment. If you spend too much, acquire too much debt or earn your income based on a house of cards, you might suddenly not be rich anymore.

When it comes to building wealth, things are different. Building wealth is a concept closely connected with time. In fact, it has to do with time in two different ways:

A good way to define “wealthy” is “having enough money to live exactly the life you want without compromise or fear.” When you’re wealthy, you don’t have to fear losing a job or wonder about how you’re going to pay your bills. It’s not a problem. Building wealth is the true path to financial freedom.

Sustainability means that you can continue to live exactly the life you want without fear for an ongoing period of time. If you can’t sustain your desired lifestyle for more than a few months or years, you aren’t really wealthy. You were just rich.

So the duration of your sustained wealth matters. The longer you can extend your desired lifestyle out into the future, the wealthier you are.

Obviously, earning a healthy income can help you become wealthy over time. Someone who earns $100,000 a year while spending only half of it can become very wealthy as well.

That’s because, by letting your income exceed your expenses by that much, you can create a financially sustainable model for building great wealth.

Concluding Thoughts on the Difference Between Rich and Wealthy

On the other hand, the whole idea of building wealth is that it is sustainable and can last you a long time. Possibly the rest of your life, or through retirement.

At Investment U, the aim of our experts is to teach you not only how to be rich but also how to be wealthy. Being rich is great. But wealth is the ultimate goal.

Now that you understand the difference between rich and wealthy, I encourage you to sign up for our Investment U e-letter, where you will find insights from some of the greatest finance and investing minds in the world. You can sign up by entering your email in the subscription box below.