Peloton (Nasdaq: PTON) stock is having a long December, but there’s reason to believe maybe next year will be better than the last. The retail and tech stock got hammered for releasing a commercial that supposedly caters to “rich elites” and “the patriarchy.” Then Citron wrote that the brand is massively overvalued.

Could a “bad” television commercial take down a brand beloved by well-to-do fitness buffs the world over? Sure.

Could Peloton stock’s valuation be fundamentally flawed and cause a massive drop in price next year? Without a doubt.

But these things miss the point of the Peloton phenomenon – which reminds me quite a bit of the Lululemon (Nasdaq: LULU) phenomenon.

What bullish investors see when they look at Peloton is a brand that has successfully courted a small army of brand evangelists. Brand evangelism is a term often used in marketing, but it’s a concept that investors should pay attention to as well.

Let’s take a look at the recent hiccups in Peloton’s value before we identify why it could still be an excellent play. 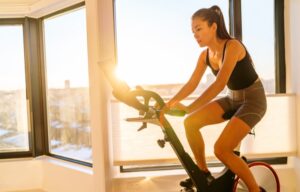 What Is Peloton, Anyway?

On one level, Peloton is simply a company that sells stationary bikes and treadmills. On another level, it is “a world-class indoor cycling studio experience on your time, and in the comfort of your own home.”

What it actually sells is a combination of exercise equipment and interactive online fitness classes. Many have compared the technology/retail company to Apple due to its ability to merge technological innovation with sharp aesthetics.

A customer buys Peloton equipment and then subscribes to live or on-demand online fitness classes. The classes are displayed on a large screen built into the stationary equipment.

This double-barreled approach to revenue is a boon for Peloton. It receives the initial outlay when the equipment is purchased and then charges for monthly subscriptions to generate a continuous revenue stream.

Wirecutter’s review of the product calls it “excellent equipment overall, and for the cycling devotee, possibly a good value or even a bargain.”

A Controversial Commercial Enters the Scene

It was the Peloton commercial that was the “shot heard round the world.” Or at least around Twitter.

In “The Gift That Gives Back,” a woman now famously known as “Peloton Wife” comes down the stairs of her beautiful snow-backdropped home. To her delight, she finds that her husband – ahem, “Peloton Husband” – has gifted her a beautiful new Peloton bike for Christmas.

As the commercial unfolds, Peloton Wife creates a video documentary chronicling her adventures with the bike, beginning with with her now-legendary “I’m a little bit nervous… but… excited” comment on her first ride.

When we see that Peloton commercial woman thank her husband for an exercise bike: pic.twitter.com/ckmlwA4GAI

By the end of the commercial, Peloton Wife looks back on her transformation and explains, “A year ago… I didn’t realize how much this would change me.” Peloton hubby smiles. Happy Peloton wife, happy Peloton life!

After the commercial went viral and became catnip for Twitter critics, Peloton lost 9% of its value in a single day. That was good for $949 million of market value.

The Taming of the Shrew, but Petruchio just gives Kate a Peloton exercise bike.

Despite a disappointing IPO in September, Peloton’s stock had been trending upward through November. But December came and made fast work of those gains.

Every criticism in the book was lobbed against the holiday-themed ad. It was derided as classist, sexist, and, maybe worst of all, confusing (the horror!).

It has even been accused of being dystopian. If you combined 1984, Fahrenheit 451, Brave New World, Black Mirror, V for Vendetta and actual fascist dictatorships, you might, the theory goes, still get something a bit better than the world created by the Peloton commercial.

Oddly, nobody seems to criticize it for using a horrible Tal Bachman song as its main theme music. Except for me, right now. I am offering that criticism.

But will any of this actually matter in the long run? I don’t think so. Here’s why.

According to marketing guru and entrepreneur Neil Patel, a brand evangelist is “a person who believes in your product or service so fervently that he or she aggressively promotes it to others.”

Brand evangelism is word-of-mouth marketing on steroids. The customer doesn’t only act as customer but also as cheerleader, marketer and public relations person all in one.

They are a super-customer willing to sing the praises of the brand or product near and far. And in many ways, this is the most effective form of marketing and reputation management available. 92% of people trust recommendations from friends. But only 24% of people trust ads. If your friend is ecstatic about a product or brand, you are likely to take that into consideration in a major way.

Peloton is a brand that is built not just on technological innovation, beautiful design, and, um, “interesting” commercials, but also on brand evangelism. Its society of patrons has been described as a cult.

It’s not just a product, a brand, or even a viral phenomenon. It’s a lifestyle and culture with members who feel like they live the product and are more than mere customers. They are participants in something greater than themselves.

People celebrate their “Peleversaries.” They travel to the New York City studio where the exercise classes are filmed and streamed. They take multiple classes per day. “The culture is very powerful,” according to New York-based entrepreneur Steve Martocci.

Members of the Peloton community claim they turned from introverts to extroverts, quit therapy, attended parties and interacted on an assortment of Facebook groups due to the Peloton culture. Facebook groups include Pelo-Foodies, Peloton Sober Squad, Working Moms of Peloton and Pelowinos.

Valuations matter. Backlash matters. But it is undeniable that brand evangelism can create a product mystique that adds tremendous value. Peloton is only overvalued if it doesn’t grow, if the culture dies, if the subscriptions stop increasing.

The stock is currently trading around $31, up from $23.52 in early November. Sure, Peloton had a rocky IPO and a rough December so far. It’s down from its peak of $37.02. And yes, Peloton may want to carefully consider its next commercial ad copy.

But look to the power of the brand evangelists to keep the Peloton stock riding high into the future for investors.