Investors in the top biotech stocks have seen some big gains in their portfolios as of late. The biotech industry has steadily outpaced the greater volatile market.

And whether you look to the past, present or future, these stocks have had an impressive record. 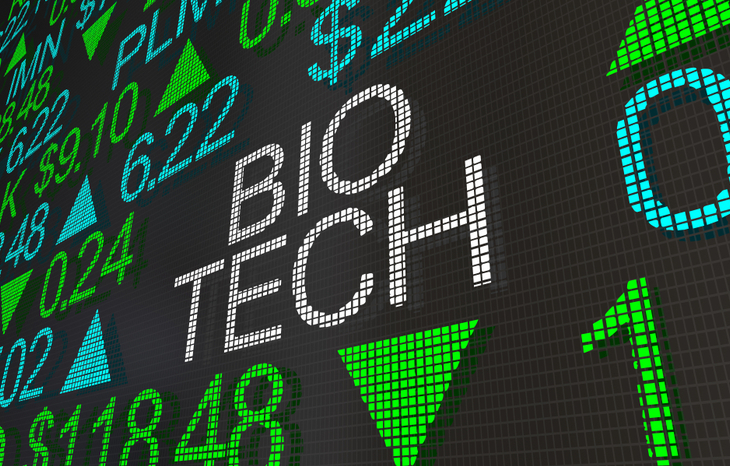 Biotech stock indexes outperformed the market during the 2001 economic downturn. And they did so again during the 2008 to 2009 Great Recession. During these slumps, as the S&P 500 Index declined some 20%, biotech stocks declined a mere 1%. And they acted as a safety net for investors again as the country entered a recession this past February.

Despite all the good news that came from a monster second quarter, the S&P 500 Index remained down for the year at the halfway point of 2020.

On the other hand, biotech stocks are sitting pretty, up more than 15% on the year. Proving what long-term biotech investors have known for decades… there are pockets of safety amid uncertainty. And this is an industry poised for extreme growth in the coming years.

The biotech industry is expected to balloon to a massive $727 billion in the next five years. And along the way, we’ll also see new biotech IPOs. When an industry grows with that kind of speed, those who invest in the right biotech stocks will make an awful lot of money.

No matter what the headlines read, there is a simple truth to the resiliency of the biotech sector: People need their medicine. And when there is an economy-crippling pandemic going on, medicines only become more valuable.

Case in point: Gilead Sciences (Nasdaq: GILD). When news got out about its experimental COVID-19 treatment, remdesivir, shares jumped up close to 20% on the year. But this biotech stock hasn’t peaked yet.

The U.S. Department of Health and Human Services announced that U.S. hospitals will be able to purchase 500,000 treatment courses by the end of September. Now, the price for a course of remdesivir has been set at $2,340 for individuals and $3,120 for insurers.

Some folks feel the prices have been set too high. Others have been critical of the fact that federal grants that supported the drug’s development aren’t better factored into the price.

But whether or not folks agree with the price structure is irrelevant. The company looks to have $3 billion in sales from remdesivir in the second half of the year. And that’s great news for this biotech stock.

Because, in other words, all of the money spent on research and development will be offset in less than a year. And the longer this virus sticks around, the more money it will continue to make. All of which is sure to make investors a good chunk of change.

The Need for Speed With Biotech

While Gilead is preparing to ship out hundreds of thousands of treatment courses, a once quiet little biotech firm has been grabbing major headlines for its rapid moves through the trial phase of its vaccines.

That company, of course, is Moderna (Nasdaq: MRNA).

At the beginning of the year, shares of Moderna were less than $20 a pop. Anyone who happened to hold shares in the company has since seen a massive 200% spike in their investment on the year, thanks in no small part to the speed it was able to develop a vaccine candidate.

The company’s vaccine uses a never-before approved messenger RNA (mRNA) therapy. Moderna designed it to harness mRNA so that it is better poised to transform cells into virus-fighting antibodies.

It’s no secret that the race for a vaccine is very much on. There are dozens of firms competing to be the first to offer a viable vaccine to the public. But this is why Moderna’s relatively small size (compared with other biotech firms) and agility are assets.

Moderna not only was the first to begin clinical trials for its RNA-based vaccine, but also will be entering Phase 3 trials shortly. The very idea that a vaccine could enter Phase 3 in six months is nothing short of incredible. Biotech companies usually have a longer regulatory approval process for their drugs.

And even if the company’s vaccine isn’t the first on the market – or if it doesn’t successfully make it through trials – Moderna’s nimble ability to address a pandemic will be enough to keep this biotech stock’s momentum up for a long time.

If Moderna’s vaccine successfully makes it through clinical trials and is mass-produced, who knows how high the stock price could climb.

If, on the other hand, the vaccine turns out to be a bust, Moderna’s growth will come a lot more steadily over time.

And there’s plenty of reason to be skeptical. More than 86% of drugs that enter clinical trials never see the light of day. So even with all of the emphasis the Food and Drug Administration (FDA) has put on fast-tracking a potential vaccine, Moderna’s crack at a vaccine is far from a sure thing.

But somehow, some way, a company will develop an effective vaccine against COVID-19. And the biotech industry will be responsible for it.

Steady, promising growth – even in the midst of volatility – paired with huge growth potential are why diversified biotech stocks, like those in the iShares Nasdaq Biotechnology ETF (Nasdaq: IBB), make so much sense right now.

Among its major holdings are Gilead and Moderna. So when either company has a watershed moment, so too will this exchange-traded fund (ETF).

But it’s a capitalization-weighted index of Nasdaq-listed biotech and pharmaceutical companies. And that means it’s poised to steadily rise or rocket forward with the industry as a whole… while also offering safety in numbers.

Because biotech stocks have outperformed – seemingly unrelated to the greater markets – an investment like this is a no-brainer. It can come with less risk than individual stocks. But it also comes with the opportunity for less reward.

Those looking to start creating a wealth-building portfolio could do a lot worse than the seemingly recession-proof iShares Nasdaq Biotechnology ETF.

For the latest trends in biotech stocks, sign up for the Investment U e-letter below. Our experts are always uncovering the latest and greatest investment strategies proven to work.

Your next big investment opportunity could be one trade away. And we’ll be there to help you along every step of the way.