The Canada Crypto Clampdown: How Digital Transactions Are Impacted

If you’re a regular crypto investor, fret not. But if you happen to be involved in the trucker-led protests in Ontario, perhaps there is reason to be worried about the Canada crypto crackdown. Just in case you’ve been news-free the past few weeks, here’s what’s going on… 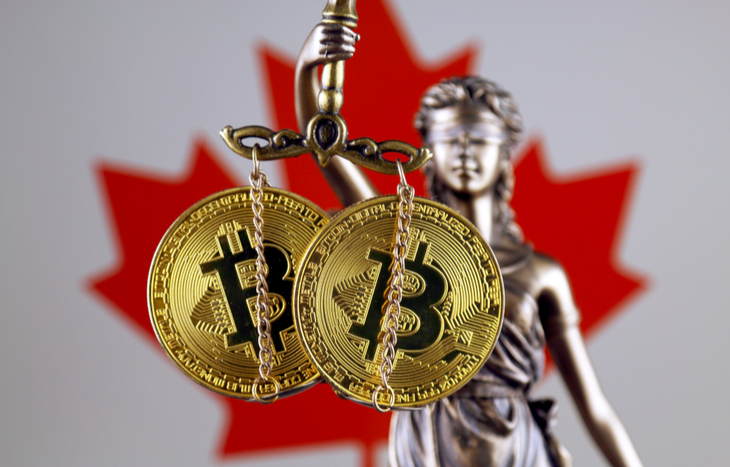 Roughly three weeks ago, a so-called “Freedom Convoy” embarked on Ottawa. The general consensus is these folks are pissed off about the pandemic-related restrictions that have been enacted over the last couple of years. And to be fair, the on-again, off-again restrictions have been hard to follow. And perhaps even hard to make sense of.

That being said, those restrictions have kept the death rate of COVID-19 in Canada significantly lower than in the U.S. But that’s neither here nor there. A lot of folks are still unhappy about how the Canadian government has handled the pandemic. And so they took to the streets… Or bridges.

The Ambassador Bridge has been a major target of the protests. And a convoy of truckers set out to block it. That’s because roughly a quarter of all trade between the U.S. and Canada comes across that bridge. So shutting it down naturally had significant implications for the country’s economy. And this was on top of preexisting supply chain issues. This made the stakes high. In turn, we have our first Canada crypto clampdown on those participating in the protest. But there is much more to this story than that.

The city of Ottawa has been brought to a virtual halt. And residents of Canada’s capital city have been none too thrilled about it. For the most part, the protests have been peaceful. Though there is security footage of some protestors attempting to start a fire in a residential apartment building.

On top of this, there’s been a barrage of blaring horns. Some protestors have been setting off fireworks at all hours. And trucks are blocking major intersections in the city. All of this generally disruptive behavior led the mayor of Ottawa to declare a state of emergency.

“Declaring a state of emergency reflects the serious danger and threat to the safety and security of residents posed by the ongoing demonstrations and highlights the need for support from other jurisdictions and levels of government.” said Ottawa Mayor Jim Watson in a press release.

However, that declaration did little to dissuade protestors. As the days turned to weeks, some protestors became short on funds. So naturally, crowdfunding sites were set up by likeminded supporters looking to “support the cause.”

On the crowdfunding website GoFundMe, an estimated $9 million was raised for the Freedom Convoy. However, the website has since issued a statement that it will refund all donations made.

Then competing crowdfunding website GiveSendGo stepped in and helped raise $2 million for the cause. It has since been hacked, exposing a list of donors that financially supported the efforts.

All of this is what led Canadian Prime Minister Justin Trudeau to step in and invoke the Emergencies Act for the first time ever. The act takes aim at the finances of protestors. And it allows banks to freeze or suspend accounts without risking civil liability. And that includes crypto assets.

Crypto Payment Providers Are Getting a Close Watch

The Canada crypto crackdown isn’t happening in a bubble. Crowdfunding platforms and any payment services linked to them, must now register with the Financial Transactions and Reports Analysis Center of Canada.

In a press conference, Canadian Finance Minister Chrystia Freeland said that the government was broadening its terror-financing rules. And these changes would cover all transactions – including crypto.

In essence, the illegal blockades in Ottawa (and across the country) highlighted the fact that some payment services were not covered in the Proceeds of Crime and Terrorist Financing Act. As such, all payment providers must now report large and/or “suspicious” transactions to financial regulators in Canada the same way banks have to. Whether this actually happens though is anyone’s guess.

But the effects of the protest have been clear – if not what the protestors intended. Law enforcement in Canada has not been able to handle the protests fully. And in turn, it’s likely that the consequences on the protestors is going to grow increasingly extensive. A Canada crypto crackdown isn’t likely to be the biggest impact that comes from this. However, if it proves effective, it could have a chilling effect on the crypto community. At least temporarily.

The Bottom Line on the Canada Crypto Crackdown

How effectual the Canada crypto crackdown will be remains uncertain. But it could prove to be an interesting test case for crypto going forward. Whether the Emergencies Act (which was crafted in 1988) does prove effective and ramping down crypto transactions heading to the Freedom Convoy is a big question.

Realistically, it shouldn’t be very difficult to send crypto funds to a wallet without triggering the suspicion of the Canadian government. But doing so via these big crowdfunding websites is a whole lot easier to track. So now it depends on how sophisticated the Freedom Convoy chooses to get.

However, us regulator crypto investors need not worry much about all of this. Despite this attempt at new regulations, there isn’t much concern about what impact this will have on the markets.

This is nowhere near the scope or scale of what China is trying to do. And it’s nothing compared to the planned Russia crypto ban. In so many ways, this is merely a scare tactic to get the Freedom Convoy out of Ottawa and get life in the city back to normal. And by some measures, it already appears to be working.