The crypto markets received exactly the kind of news they didn’t need. Amidst months of slumping valuations, a Russia crypto ban got one step closer to taking place. We’ve seen news of a possible ban in the country before. But this time it’s eking towards a much greater possibility. 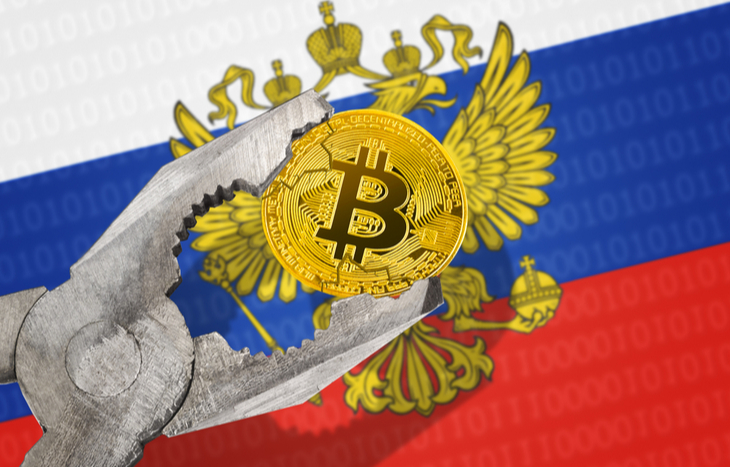 This week, Russia’s central bank issued a more official proposal to ban mining and the use of cryptocurrencies within Russian borders. The announcement came with the usual platitudes… Crypto is a threat to financial stability. It can disrupt the sovereignty of the country’s monetary policy. And even be a threat to its citizens’ wellbeing.

That last point was a new one to us. Especially in a country where roughly one out of every four citizens is unbanked. But we already knew that despots and dictators aren’t big fans of cryptocurrencies. So this announcement is pretty on-brand for Russia.

Furthermore, the central bank proposed all-out preventing financial institutions from any dealings with cryptocurrencies. And to prove that the Russia crypto ban has teeth this time, it also recommended developing ways to block exchanging fiat money for crypto. This would in effect ban crypto exchanges from operating in the country.

This announcement sent crypto prices into free fall. And there is some justification for it. Average annual crypto transactions come to around $5 billion in Russia. And the crypto mining operations in the country make it one of the largest in the world – behind only the U.S. and Kazakhstan.

What the Russia Crypto Ban Means for Investors

The easy answer is this is a buying opportunity. Bitcoin has shed more than 11% since the announcement. Ethereum has fared even worse. Its value is down more than 14%. Prices of the majority of major tokens are trading at their lowest prices since last September.

There is however the chance that this announcement could have a chilling effect on crypto markets. This paired with the news that mining in Kazakhstan may be slowing down could mean a prolonged dip in the markets. So things might not bounce back to normal as quickly as they did the first time we heard about a proposed Russia crypto ban.

On top of this, Russia pinpointed the ever-popular energy problem as part of the reason behind its ban. When environmental arguments come into the fray, it tends to bring out the usual suspects with their megaphones.

We should expect to hear from Bill Gates on the topic again soon. Last March he said, “Bitcoin uses more electricity per transaction than any other method known to mankind… It’s not a great climate thing.” So points apparently go to the Russia crypto ban for this move?

To be fair, Bitcoin mining does consume a lot of energy. It involves a lot of users and a lot of computing power to do complicated math problems. But that’s on purpose. It helps make transactions safe, secure and anonymous. That’s at least part of crypto’s unique selling points.

But if only it were that cut and dry…

The Energy Drain Is Overhyped

Not to pick on Bill Gates, but let’s look at another one of his quotes:

Early on, Paul Allen and I set the goal of a computer on every desk and in every home. It was a bold idea, and a lot of people thought we were out of our minds to imagine it was possible. It is amazing to think about how far computing has come since then, and we can all be proud of the role Microsoft played in that revolution.

After last year’s incredible run in the crypto markets, it wouldn’t be hard to imagine similar words coming out of the mouths of crypto investors. They too see the possibilities of a revolution in the making. And let us not forget that computers also have a big environmental impact.

These days, it’s easier and often cheaper to buy a new computer than fix an old one. The average lifespan of these machines we use every day is around five years. And these machines require a lot of fossil fuels and chemical processes to be manufactured. And the batteries that power them contain toxic chemicals… Chemicals that often end up in landfills.

So in the words of our friends at Manward Press:

The crypto industry is still in its early stages. And crypto developers have acknowledged the environmental impact the industry has.

There have already been several promising developments tackling the issue.

Many crypto mining companies are using renewable energy to power their machines.

To hammer home this point, the University of Cambridge’s third Global Cryptoasset Benchmarking Study found that 76% of cryptocurrency miners use electricity from renewable sources in their operations.

The Bottom Line on the Russia Crypto Ban

The big news about the Russia crypto ban is headline worthy. It could have some medium- to long-term effects on the prices of crypto. But this is far (very far) from a death blow. Plus we only expect these types of stories to become more common this year.

As it takes one step closer to banning crypto, it also becomes closer to unveiling its digital ruble. And as we’ve seen in China as well, governments don’t like their digital money to face competition. But on the upside, it doesn’t sound like the Federal Reserve will be unveiling a digital currency in the U.S. any time soon. The Fed remained noncommittal in its latest paper that detailed the pros and cons of a digital currency. And that’s just fine with us. There are plenty of other cryptos in the sea. And what Russia doesn’t want in its country, we’ll be more than happy to take off their hands. Cryptocurrencies aren’t’ going anywhere. And those that ban or ignore them are likely to be left in the past.

For those that aren’t scared off by the Russia crypto ban stories, there are plenty of opportunities. If you’re looking for a way to calculate your crypto returns over the years, check out our crypto calculator. It will bring you a lot more peace of mind that buying and selling on the headlines.