While the broader markets have had a poor February, Corning (NYSE: GLW) stock has done quite well. Beginning with a strong earnings report on January 26, the stock has seen a reasonable increase in share price. Since then, the stock has largely leveled out. However, with the markets continuing to drop, even that is a relative sign of strength. To discern an outlook for Corning stock, let’s look at recent trends and financial data. 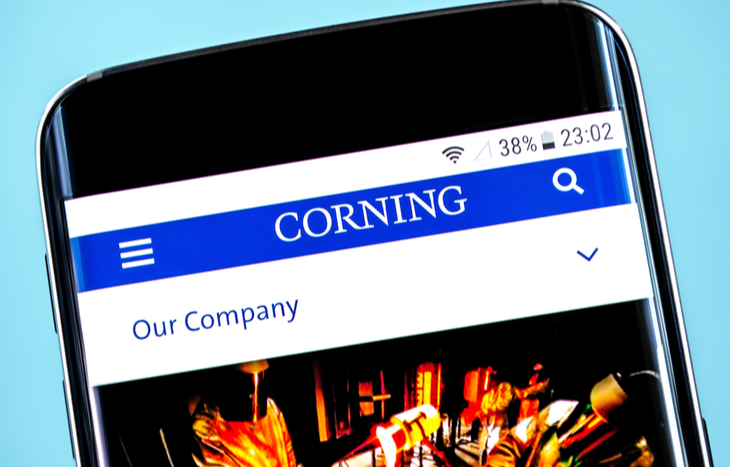 Corning is a company that was originally a glass company, but has transitioned into a tech company. The company still creates glass, during the pandemic creating glass vials for vaccines. In addition, they also create auto glass and car coating(s). However, the majority of the business now focuses on different tech segments. Today, a majority of Corning’s business is involved in fiber optic cable production. This provides exposure to broadband and telecom infrastructure, which has benefited during the shift towards 5G.

Insofar as their tech and general glass segments have benefited in recent months, their automotive has not. This was due to chip shortages, freight issues and other factors which negatively impacted automotive sales. Given that many of those negative factors still exist, that segment may continue to suffer. Chip shortages in particular will be the greatest hindrance to this segment, as well as to the broader automotive industry.

In Corning’s most recent earnings report, the company reported strong financial data. Core sales were up 12% year-over-year (YOY), and overall sales gains were 23%. However, gross and operating margin were both down, leading to Corning discussing renegotiations of long-term contracts. Corning also announced an increased dividend, to be paid out on February 28. The dividend will be 12.5% higher than its previous quarterly dividend, at $0.27 per share. In addition, the CEO expects the company to continue growing its dividends 10% annually through 2023.

In the last month, the stock is up over 18.2%, while the American markets are all down. With that being said, the stock has fallen marginally in the last couple of weeks. On February 10 the stock was trading above $43.30. Which is roughly 4% above where the stock is trading now. Looking at the chart, it seems that a bull-flag is appearing. The [perceived] appearance of this pattern provides ground for a potential positive reversal in the near future. In addition, the RSI is neither overbought nor oversold, sitting at just above 55 at this time.

Given that Corning stock has radically outperformed the market in recent weeks, it’s tempting to believe this trend will continue. However, radical market shifts always have the potential to impact specific companies. For that reason, it’s also important to monitor market trends, as well as geo-political ones.

In addition to positive institutional transactions, insider transactions have been positive as well. In the last six months, insiders have been purchasing more shares than they are selling. This suggests that insiders are, and continue to have, a positive outlook for the company.

Corning has already been a big winner to this point in the year. Corning stock’s performance has radically outshone the broader markets. It’s been significantly up while the markets are down. Technical trends also seem to suggest that a recent cooldown in the stock’s performance may be leading to another positive move. In addition, insider and institutional transactions have only improved in recent weeks. All of this, in addition to strong financial data, outlines a positive outlook for Corning stock. However, market and geo-political trends will also be worth paying attention to. Abrupt events have the potential to impact any company, so a sense of caution will be warranted.