How Can I Invest in DeFi Stocks?

The process of going public usually requires the help of major financial institutions. In a sense, this kind of goes against what decentralized finance companies stand for. This is just one reason why it’s so hard to find DeFi stocks. Luckily, there are still a few that we can look at. We’ll examine those in a second. First, let’s take a deeper dive into the main drivers behind decentralized finance.

Decentralized finance (DeFi) is a new style of financial technology that is built on secure ledgers. It uses the same technology as cryptocurrencies. However, DeFi goes one step further than crypto. For example, cryptocurrencies are really just tokens that represent value. DeFi allows for things like contracts, apps, services and much more. Cryptocurrencies fall under the DeFi umbrella.

The main purpose of DeFi is to take control back from major financial institutions. But what is the problem with these institutions? 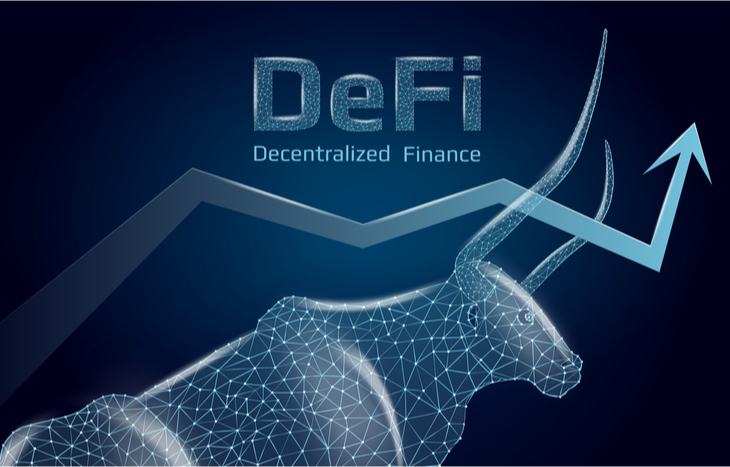 What’s Wrong With Our Current System?

Our existing financial system is an oligopoly. This means it’s dominated by a handful of major companies. The “Big 4” U.S. banks are JPMorgan Chase, Bank of America, Wells Fargo and Citi. Together, they control nearly half of U.S. retail deposits (approx $4.6 trillion). This oligopoly is the result of decades of mergers & acquisitions. In the 1990s, consumers could pick from about 40 major banks. Today, they can only pick from four.

In general, fewer companies means less competition. Less competition leads to higher prices and less value for consumers. Accordingly, today’s financial world is designed to maximize profit for banks. It’s not set up to benefit the consumer. Here are just a few examples:

The consumer isn’t getting a whole lot from this relationship. Granted, the bank is supposed to keep their money safe. However, as we’ve seen in recessions throughout history, consumer’s money is never really “safe.”

DeFi addresses a lot of these issues and gives consumers another way to handle their money. These DeFi stocks are helping to give consumers backs some control of their finances.

What’s The Point Of DeFi?

Instead of a bank, decentralized finance uses a secure ledger to approve transactions. I won’t get into the specifics of how that works here. Just know that it’s a safe way to remove the middleman from financial transactions. This ultimately eliminates the need for traditional banks.

Additionally, DeFi systems give you much more control over your money. You can store it in a digital wallet and access it anywhere there’s Wi-Fi. You can also send money to whomever you’d like in seconds, not days.

As previously mentioned, the DeFi movement is ultimately about control. In our current system, the bank controls your money. With decentralized finance, you control your money.

So which companies are helping consumers take back control? Let’s take a look at how you can invest in DeFi apps with these four top DeFi stocks.

Coinbase is one of the world’s largest cryptocurrency exchanges. There are a few other major exchanges. However, Coinbase is the only one that is publicly traded. By default, this makes it one of the top DeFi stocks to buy. Coinbase’s main platform lets users easily buy/sell crypto. It also recently launched an NFT marketplace.

The potential for Coinbase’s business is massive. In some ways, it feels like cryptocurrency has already reached the mainstream. However, this really isn’t the case. According to Pew Research, just 16% of Americans have invested or traded cryptocurrency. Even less have bought NFTs or used other DeFi services. We are still very much at the beginning of this transition to DeFi.

Coinbase is also growing at an insane rate. For FY2021, it reported annual revenue of $7.84 billion. This was up 514% YoY. Even better, it reported a net income of $3.62 billion. This was up a whopping 1,000% YoY. It’s rare for public companies as young as Coinbase to be this profitable, but it can keep up with these numbers it will remain a DeFi stock to watch in the years to come.

Robinhood is most well-known for its easy-to-use stock trading platform. However, it also gives users the ability to buy and sell popular cryptocurrencies. Crypto is more of a side hustle for Robinhood. It offers over 10 different coins, including popular meme-coins like Shiba Inu. You can also find real-time data for over 60 other coins, but you can’t buy or sell them.

One major difference between Coinbase and Robinhood is that Robinhood is not yet profitable. Although it appears to be moving towards profitability with a 41% YoY increase in net income for Q2 2022. But seeing as it only recently went public, there is still plenty of room to grow for this top DeFi stock.

Riot Blockchain is a U.S.-based Bitcoin mining company. If you’re not familiar, Bitcoin mining is the process of verifying new Bitcoin transactions. When you think of a typical miner, you envision someone digging for gold/jewels. A miner is rewarded for their hard work by finding a piece of gold. For Bitcoin miners, instead of digging, they verify transactions to ensure they’re all legitimate. And, instead of gold, they are paid in Bitcoin. Riot Blockchain does this at scale.

Just like Coinbase, Riot’s revenue is growing exponentially. In the second quarter of 2022, its revenue jumped 112% YoY, keeping pace with consistently high growth in 2021. However, its total Q2 2022 revenue was still just under $73 million. This could mean that Riot still has lots of room to grow as it moves towards profitablility.

The biggest reason that Block is one of the top DeFi stocks is its name. It was previously known as Square but was recently rebranded to Block. Just like Facebook/Meta, this was done to emphasize a change in its business. Moving forward, Block Inc will be expanding its Defi offerings. However, also like Meta, it’s a little unclear what these expansions will be. There is a lot going on under the hood but few of these projects have been widely publicized.

It’s also notable that Block Inc is run by CEO Jack Dorsey. Dorsey is the founder and former CEO of Twitter. He recently stepped down to focus on Block Inc instead. When doing so, he stated, “there is nothing more important in my life to work on right now.” Strong leadership and a recent rebranding help make Block Inc an exciting DeFi stock to watch in the near future.

Should You Invest in DeFi Stocks?

The future for most defi stocks is incredibly bright. However, this is mainly just due to the nature of the industry. It’s not an understatement to say that DeFi could change the way the world works. For this reason, it’s worth considering adding a few DeFi stocks to your portfolio.

With that said, it’s highly unlikely that every single DeFi company will stand the test of time. The current environment feels similar to the 2001 Dot Com Era. New technology is creating an exciting new market. In 2001, it was clear the internet was here to stay. However, only a fraction of internet companies from the 2000s are still around. DeFi could be the same way. There are hundreds, if not thousands, of exciting companies and projects. Ultimately, only a handful will end up making it in the long run.

Keep this  in mind when deciding whether or not to invest in DeFi stocks! I hope that you’ve found this article valuable! As usual, please base all investment decisions on your own risk tolerance and research.