Why is the Dow Jones Down and What Does it Mean?

The Dow Jones Industrial Average (DJIA) is the country’s oldest incarnation of a stock market benchmark. Alongside the S&P 500, the DJIA is widely regarded as the best determinate of the stock market’s health and activity. And, unfortunately, the readings the DJIA has offered so far in 2022 have been negative. With the Dow Jones down, investors are weary about the trajectory of their investments.

But why is the Dow Jones down? What’s driving negative returns this year and will we see any relief in the near-term? Let’s explore some of the biggest reasons the DJIA is negative in 2022, and why it continues to sink lower as the year trudges on. 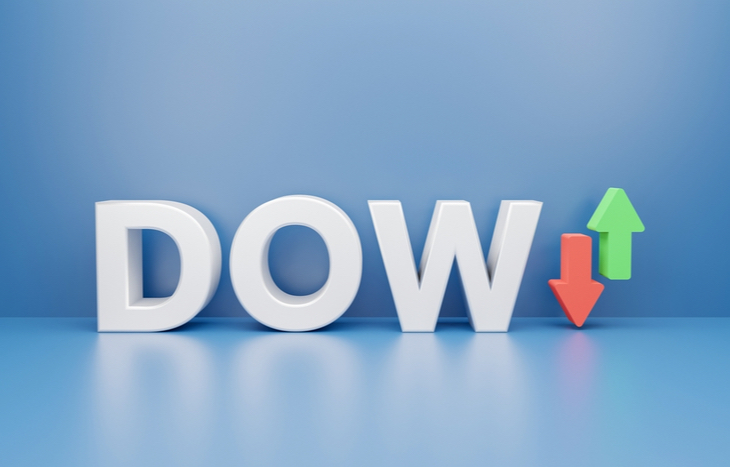 Remember What the DJIA Represents

Before we dive into the Dow Jones’ performance this year and explore its catalysts, let’s take a moment to remember what the DJIA represents.

As a price-weighted index of the country’s 30 largest public companies, the DJIA effectively represents the biggest players in the stock market. These large- and mega-cap companies are the driving forces behind a majority of the market’s movements. As a result, they’re a representation of the market’s macro indicators.

Why is this important? Because the DJIA doesn’t contain some of the most-tracked and -traded companies in the market today. Companies like Amazon (NASDAQ: AMZN), Tesla (NASDAQ: TSLA) and more aren’t tracked by the DJIA, which means this index tends to see less volatility than an index like the S&P 500, which is much more inclusive.

As we look at benchmarks for stock market performance in 2022, the DJIA represents a more stable look at the country’s largest companies. It’s relatively insulated from some of the volatility befalling tech companies like Meta Platforms (NASDAQ: FB), Netflix (NASDAQ: NFLX) and others.

Looking at the DJIA’s Performance

It’s easy to look at a stock chart and say “the DJIA is down,” but to truly understand the significance of its recent activity, we need to look at how it has performed across different windows.

What does this tell us? For starters, that the market isn’t just down; it’s consistently down. Moreover, it’s beginning to trend down in a more significant manner, given that the YTD figure is down more than the 12-month metric.

There are also important considerations within the macro measure of the DJIA’s decline this year. For instance, from April to May 2022, the DJIA closed down for eight consecutive weeks: a trend not seen since 1923. Moreover, investors seeing the Dow Jones down might not realize that it has continually tested resistance levels in 2022 and has broken support several times, precipitating major sell-offs of companies represented within the Dow Jones.

Ultimately, the DJIA represents the market’s largest companies. If the Dow is posting losses, it means there are cracks in the foundation holding up the market’s biggest earners. Consistent losses are worth paying attention to; even if you’re not invested in DJIA companies.

Recession Indicators From the Dow Jones

As the Dow Jones’ losses mount, investors have begun looking for recession indicators. What’s worse is that they’re finding them.

As mentioned, the DJIA’s eight-week slide in April and May is something not seen since 1923. While the historical period itself isn’t relevant, what’s alarming to investors is that this type of backslide hasn’t happened in more than a century. Worse still, it coincides with a drop in the Dow Jones Transportation Average (DJTA). According to Dow Theory, the DJIA is likely to follow the DJTA. If it does and both continue to trend down, they’re likely to fall into recession territory, one perpetuating the losses of the other.

Many investment banks and analysts have also begun using the DJIA’s recent performance as grounds for forecasting a recession. Deutsche Bank offered a recession prediction in April when the Dow Jones down-trend was only just beginning. Since then, other investment banks have come forward to express fears of recession as the DJIA’s stalwart constituents continue to lag the market.

While it’s impossible to predict a recession, it is possible to recognize the signs of a building bear market. Right now, the DJIA’s performance is offering some of the best evidence of a potential economic recession—and investors have taken note.

Using the DJIA as an Economic Indicator

During periods of market downturn, many investors look to the DJIA as a way to gauge the baseline health of the stock market. Because it represents the largest companies, investors use it to judge the overall volatility and stability of their own portfolios, regardless of whether they hold stocks tracked by the DJIA.

With the Dow Jones down in 2022, it’s a clear statement that even the largest public companies are suffering. The continued, protracted decline of the index has begun ringing alarm bells for investors who fear recession or a bear market. As an economic indicator, the DJIA is telling us that it’s time to be more defensive with our investments.

Need help reallocating into more defensive positions? Discover the advice you need in one of the best investment newsletters! These experts cover the market from all angles. And this will help you batten down the hatches as the DJIA and other major indices continue to slide.