Garmin Stock: Is it Time to Buy?

Long ago, Garmin stock (NYSE: GRMN) was best known for its GPS navigation devices that users use in their cars. At the time, Garmin’s technology was revolutionary, and everyone wanted one. Garmin stock was on fire. Between 2000 and 2008, the stock was up almost 10x.

During the mid-2000s, smartphones begin to become wildly popular. As you probably know, users can download many useful apps to their smartphones. Some of those useful apps were navigation apps like Google Maps and Apple Maps. The new navigation apps required no additional hardware to mount on your dashboard. Unfortunately for Garmin stockholders, the in-car navigation devices soon became a thing of the past.

With such a history, you might think Garmin stock is just worthless paper. On the contrary. Since Garmin stock collapsed during the financial crisis and suffered at the hands of smartphone navigation apps, the company reinvented itself. Since then, the stock is again up more than 10 times to its 52-week high of almost $180. 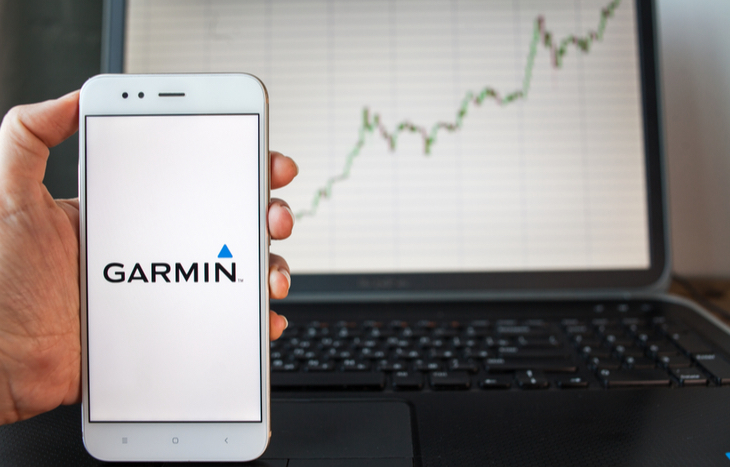 Instead of rolling over and dying, Garmin reinvented itself. The company used its expertise in navigation to propel the business in other areas of navigation. Though Garmin still has an automotive segment, they’ve added aviation and marine segments. In addition, they’ve entered the outdoor and fitness segments of the market.

Readers can see Garmin’s success in its sales line. In 2013, the company had revenue of $2.6 billion. Over the next eight years, they grew revenues an average of over 8% per year. In 2021, the company generated revenue of almost $5 billion.

Let’s take a closer look at Garmin stock and its business segments.

Garmin had already been certified to make ADS-B products when the rules were enforced. Sales for Garmin stocks aviation segment benefitted handsomely. By the way, Garmin’s certifications are not easy to get. The difficulty in becoming certified could keep new companies from coming to market. New aircraft could include Garmin’s ADS-B devices. Sales for Garmin stock could continue to grow.

Garmin’s marine products have also become popular. Most of the products sold through Garmin’s marine segment are bought by recreational boat makers. Of course, these products include navigation devices called chart plotters.

In addition, they sell sounders that display what is in the water directly under the boat. Boat drivers use the technology to steer clear of underwater objects that could damage the boat. Popular among fishermen is Garmin’s fish finders. Fishfinders use sonar to detect the location of fish.

Hikers use Garmin devices to navigate rugged terrain that might not be mapped out. The devices help hikers know where they’re going, how far they’ve traveled, and their elevation. In addition to making sure hikers get to their destination, Garmin’s devices can transmit their location in the event of an emergency.

Outdoor devices are so popular; even dogs use them! Hunters can use outdoor devices to track their hunting dogs and training purposes.

More recently, fitness watches have become very popular. Garmin stocks fitness segment is the largest in terms of revenue. In 2021, the segment had over $1.5 billion in sales. When you think of fitness smartwatches, you might think of Apple Watch or Fitbit. Garmin takes fitness to the next level.

In addition to health information, Garmin devices have extra uses for specific sports. For runners and cyclists, Garmin’s devices track your distance and map out your travel. Golfers use devices to gauge the distance to greens and map out each hole. Swimmers use water navigation to let them know how far they swam.

Athletes who want fitness devices often work out in hot or cold temperatures, underwater, or need a device that can last during harsh use. Garmin’s fitness devices are designed to perform under pressure.

Many of the trends that have helped Garmin stock in the past could continue. If that is the case, readers might want to consider the stock.