3 Ice Cream Stocks That Could Benefit from Summer Revenge Spending

For the better part of the last two years, the overwhelming majority of the world has been quarantined. This has meant no traveling, eating out, or really having fun of any kind. Thankfully, this summer is shaping up to be totally different. This summer has the potential to be the first in years that’s truly “open.” For this reason, investors expect there to be pent-up demand for recreational activities like travel, camping and going out to eat/drink. This “revenge spending” could show up in a number of different places. This includes smaller categories like ice cream. With that said, let’s take a look at three ice cream stocks that could benefit from revenge spending this summer. 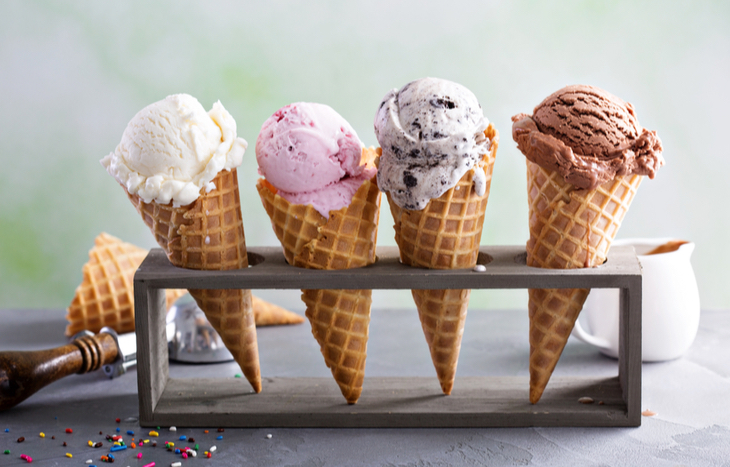 Unilever operates as a parent company, not a consumer-facing brand. For this reason, there’s a chance you might not have heard of it. However, Unilever owns around 400 brands in total. There’s a good chance that you recognize most of them from your local grocery store. Among these brands are some of the world’s most popular ice cream brands. For example, it’s portfolio of ice cream brands includes:

As one of the world’s largest sellers of ice cream, Unilever is definitely one of the top ice cream stocks to consider.

In 2021, Unilever posted annual revenue of 52.44 billion euros as well as a net income of 6.04 billion euros. If there is a surge in ice cream revenge spending this summer, Unilever could definitely be one of the main companies that benefits.

Nestle is a multinational food and drink company based in Switzerland. It is similar to Unilever in the sense that it is a massive conglomerate that owns tons of different brands. The biggest difference between the two is that Nestle operates exclusively in the food and beverage industry. Additionally, a few Nestle brands that you might recognize are KitKat, Nescafe and San Pellegrino.

Nestle and Unilever produced a huge percentage of the world’s store-bought ice cream. If you believe that consumers will spend an outsized amount on ice cream this summer then both of these companies are good options. You can even take this thesis one step further by researching which ice cream brand might receive the biggest sales gain.

Pure-play ice cream stocks, on the other hand, are a little harder to come by. Most ice cream companies are not really big enough to go public. Fast-growing ice cream brands are also usually bought by a bigger company before they can go public. Your best option here is to invest in a major restaurant group that sells ice cream.

McDonald’s is a sleeper to be one of the most successful ice cream stocks of the summer. Now, obviously, most people view McDonald’s as purely a burger joint. However, with just over 40,000 global locations, McDonald’s will almost definitely be slinging ice cream this summer as well.

There are a few reasons that I picked McDonald’s over other fast-food companies. Most of them come down to investabilty.

Almost all major fast-food chains are owned by a parent company. For example, Warren Buffet’s Berkshire Hathaway owns Dairy Queen. Or, if you want to invest in Burger King then you need to buy Restaurant Brands International. When you buy stock in these companies, you’re also buying all of the other businesses that they own.

McDonald’s, on the other hand, trades as its own entity. This makes it a little more of a pure-play ice cream stock. On top of that, McDonald’s is one of the most successful businesses in the U.S.

In 2021, it reported annual revenue of $23.22 billion and a net income of $7.55 billion. It is also a member of the Dow Jones Industrial Average. On top of that, it’s one of the most recognized brands in the world. If you don’t want to buy McDonald’s stock, you still have two other options.

McDonald’s is one of the biggest publicly-traded fast food restaurants that sell ice cream. It’s also one of the few that is not owned by a major conglomerate. However, there are two other options: Wendy’s and Shake Shack.

For instance, Wendy’s operates over 6,500 locations globally and is most well-known for its popular Frosty. And Shake Shack operates just 250 locations. In terms of size, both of these franchises pale in comparison to McDonald’s. However, that doesn’t mean that they can’t experience potentially outsized ice cream sales this summer.

I hope that you’ve found this article on ice cream stocks to be valuable! Please remember that I’m not a financial advisor and am just offering my own research and commentary. As usual, please base all investment decisions on your own due diligence.