One of my favorite parts of investing is that investors hardly ever agree. You can get different opinions from different investors about the same stock. Nowhere is this conflict of opinions more obvious than with movie theater stocks. One investor might tell you that Company A is the future. Directly after, the second investor could tell you that Company A is doomed to fail. That is why it’s so important to do your own homework and trust your decisions.

With the rise of streaming, it’s easy to make a case that movie theaters are dying. For example, the cost of a movie ticket is about $10. This is very close to the price of a monthly subscription for most streaming platforms. Your money is much better spent on a streaming service because streaming allows you to watch unlimited movies, as opposed to just one.

However, you could also argue that the movie theater experience is much better than streaming. No matter how big your TV is, it’s not as big as the Big Screen. Additionally, movie theaters offer a communal experience.

As for my thoughts, I’ll share them at the end of the article. Until then, let’s look at three of the best movie theater stocks to buy. 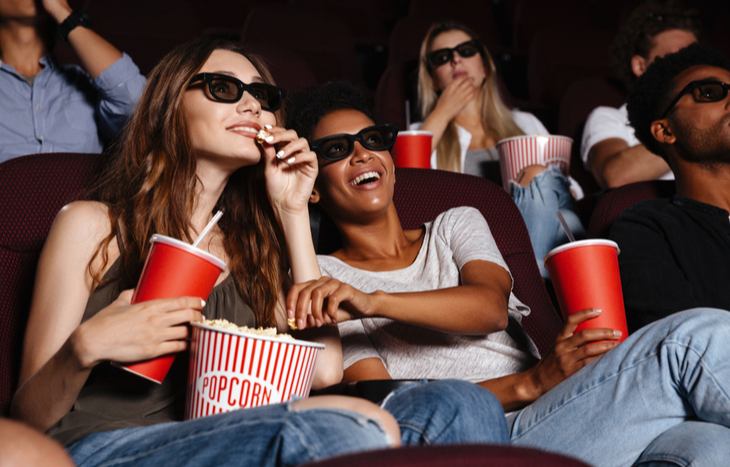 AMC is definitely the first stock to talk about when bringing up movie theater stocks. This is mainly because AMC Entertainment is the largest movie theater chain in the world. It is also one of the most interesting movie theater stocks that you can buy. From 2016-2020, AMC lost 90% of its value. But, suddenly in 2021, it surged over 2,600%.

AMC’s surge was largely based on a short squeeze. A short squeeze occurs when many investors are betting against a stock. First, the price rises slowly. Then, the short-sellers are forced to buy shares to cover their losses. This rapid buying sends the stock surging in a short period of time.

What’s in Store for AMC?

Since the short squeeze, AMC has started a few exciting initiatives. First, it announced that it will be accepting cryptocurrency for movie tickets. It also released a batch of NFTs to accompany Spider-Man: No Way Home. This NFT release apparently flooded AMC’s website traffic. It was enough to crash the site entirely.

To read more on one of the best movie theater stocks, check out my article on the top Reddit stocks to invest in.

Another movie theater stock to consider buying is Cinemark.

Just like AMC, Cinemark saw a lot of excitement for Spider-Man: No Way Home. This movie recorded Cinemark’s second-biggest advance ticket release ever. It fell just short of Avengers: Endgame. This could be a very good sign for bulls of the movie theater industry. Justin McDaniel, Cinemark’s SVP of Global Content stated, “This surge of ticket sales for Spider-Man: No Way Home proves the power of an exclusive theatrical release for a compelling film, especially as people are eager to get out of their homes and share in a communal experience.”

Even though streaming has certainly become quite popular, people are clearly still willing to spend on movie tickets.

Imax is a movie theater chain that takes the viewing experience to the next level. It does this by using high-resolution cameras, huge screens, and stadium seating.

Just like the previous movie theater stocks, Imax is experiencing a surge in demand. According to CEO Richard Gelfond, “The power of the IMAX theatrical window for blockbuster films is clear as we continue to draw moviegoers to the theaters, gain market share, and grow our relationships with local exhibitors, studios, and filmmakers.” He made this comment after reporting $142 million in global sales for Q3 2021.

As promised, here are my thoughts on movie theater stocks. To start, I have to acknowledge that streaming definitely has the advantage. It’s just a cheaper and more convenient way to watch a movie. With that said, it’s also cheaper and more convenient to look at pictures of Disney World than to visit the park in person. This doesn’t stop millions of people from visiting Disney World.

Movie theaters offer a unique experience that can’t be replicated by just sitting at home. Film is also one of the most complex art forms. It combines visuals, sound and effects to deliver a message to the viewer. These art forms were designed to be experienced on the big screen. 99% of the time, I’m willing to shell out the money to see the newest Blockbuster film.

I hope that you’ve found this article valuable when it comes to learning a few of the best movie theater stocks to buy. As usual, please base all investment decisions on your own due diligence and risk tolerance.