One way to take advantage of penny stocks on the rise is by using the “momentum trading strategy.” There are many different strategies in trading. And this one requires finding out which stocks are doing well. For example, those that have gone into an uptrend. The momentum strategy capitalizes on temporary bulls in the market.

For example, if a penny stock has begun rising for a week or two, that would get some attention. It can be easy to find these. Because lots of people are talking about them. You could buy into that stock, then buy out some time later and make a profit.

How do we use this strategy? Find more long-term increases in sustainable businesses. And we want them to be industries that are growing as time progresses. So, I’ve outlined a few for you to investigate.

Penny stocks are very volatile. If you are investing money that you cannot afford to lose, you should wait to invest in penny stocks. Yes, the volatility can bring you very high rewards. But, that volatility can also make the price go down fast. And that’s because there are fewer shares going around. Fewer, that is, than in a stock with a stable price.

But, that being said, you can find some real gems in the penny stock world. Here are some penny stocks on the rise. And they’re predicted to keep rising in 2022. 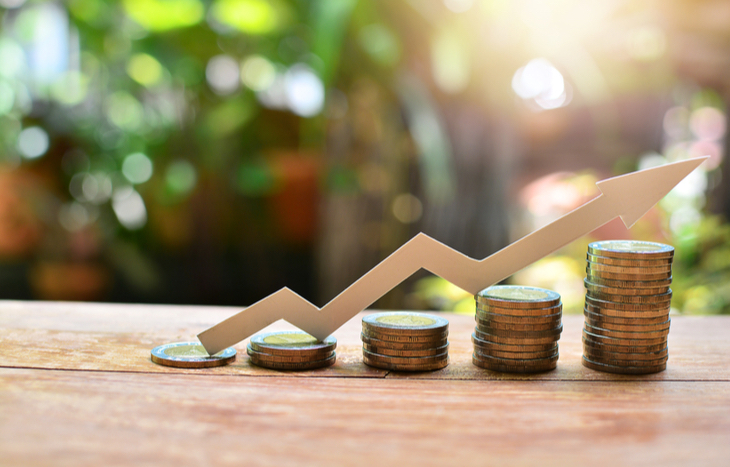 Top Penny Stocks on the Rise

Penny Stocks on the Rise Now

Hive Blockchain is a penny stock on the rise that’s likely to keep going for a while. With a small market cap and a growing industry, it likely has many milestones to cross. It saw huge growth at the end of 2020 and into 2021. And although it saw some correction, it looks like it’s beginning to pick back up again.

The company strives to be transparent. And this is shown through its recent quarterly reports. But, the company also released reports for how much it’s produced for the month. Including its mining capacity.

This penny stock on the rise has shown off in the past. High figures were reached in a relatively short period of time. Since then, they corrected downward, of course. But, now prices are climbing fast again. And solid companies’ stocks usually grow larger over time. So, this rise could outperform the last one.

And, since Transocean currently at all-time lows, it’s likely to be running up to reach normal prices. The momentum from those two facts could make this penny stock on the rise go very high soon. It’s also in a good industry, the offshore drilling business. And it owns drills in many different countries. Plus, oil prices are likely to go up even higher this year.

Everyone loves silver and gold. Plus, this Canadian company offers a dividend yield of about 2%. They own seven active gold mines, and commit themselves to having great leadership. Plus, this penny stock on the rise stresses that they use financial restraint in the company.

This penny stock on the rise is in another great industry. As the U.S. is turning more to alternative energies, we are trying to rely less on traditional energy. Things like coal, oil and gas. And there aren’t many other alternatives for our energy demand. This puts uranium in a very helpful spot.

Uranium stocks are gaining attention. Specifically, for its ability to produce energy for power plants and submarines.

And since this penny stock is a U.S. based uranium mining organization, it’s in a favorable position. Plus, the company also operates mines in Mexico and South America.

This penny stock on the rise has been stable for a while. But, it’s starting to push upward again. Borr is in the business of providing offshore drilling services, they can drill up to 400 feet deep. And Borr does this for the oil and gas industries. So, you can see how the increase in oil and gas prices will likely impact Borr, too.

DiDi is a penny stock on the rise that was banned by the Chinese government. An audit was performed by China. They found that DiDi’s policies were intrusive in collecting customer data. So, it banned from all app platforms. And its stock fell far.

But, DiDi complied and fixed the issues. Now, it’s stock could come back up. As China’s largest alternative transportation company, they are poised to keep growing. Plus, they also have their vision set to enhance the tech in vehicles and transportation.

MannKind is a penny stock on the rise that provides biopharma solutions for diseases. One of those solutions is inhalable insulin. The company has a mission to help those who don’t have many options when it comes to their illnesses. In particular, there’s a focus on the lungs and endocrine system.

They’re recently participating in plenty of conferences. And, MannKind has announced they’re continuing collaboration with Thirona Bio, another biopharma company. Together, they aim to create a solution for fibrotic lung diseases.

Penny Stocks on the Rise No. 1 Southwestern Energy Company

This penny stock on the rise was awarded 2021 Fortune 500 status. It’s a natural gas exploration and production company. And it’s headquarter in Texas, operating around the U.S.

So, it’s likely the company is thriving from these increased prices of gas and oil. And the company’s stock prices showed great potential about five or six years ago. Now, share prices are down drastically. And that creates a great opportunity for investors. Oil and gas prices are up right now. And that trend is likely to keep going into 2022.