These Countries May Move to Ban Cash

There’s a war on cash.

The rise of credit and debit cards has eroded the need for cash. Meanwhile, the quick uptick of mobile payments over the last several years has been pushing physical money to the brink of obsolescence.

In fact, in many countries, cash is already disappearing. In several, it could soon be banned altogether.

“We’re focused on putting cash out of business.” That was Visa (NYSE: V) CEO Al Kelly at the company’s investor day in June.

During the summer, Visa announced it would grant up to $10,000 to 50 small merchants if they stopped accepting cash completely, instead accepting only debit cards, credit cards and mobile payments.

Some restaurants, like Sweetgreen, have already phased out cash as a form of payment in many states.

That’s a credit card executive’s dream. And more importantly, I believe that’s what a credit card CEO should be focused on – eliminating cash. It’s their competition.

Consumers are foreseeing cash being eliminated much more quickly than executives are.

A recent survey found that consumers thought they’d be using 32% less cash in the future. Executives in the same survey thought the decline would be a more conservative 5%.

At the same time, a study by NTT Data found that companies that accept mobile payments are growing faster and are more profitable than those that don’t.

Of companies that reported annual revenue growth of 11% or more, 43% offered an app that supported purchases and payments.

So executives – if they haven’t already – really must sit up and take note.

There may be no more perfect picture of a cashless society than what we’re seeing in Asia.

In China, cash is gravely wounded and on its deathbed.

And if you don’t have a mobile payment account, you’re going to have a difficult time accomplishing even the most basic tasks.

And here we have to remember the economies of scale. Both are largely China-centric. Given the size of its domestic economy, why race to expand internationally?

Because of the country’s sheer size, China’s embrace of mobile payments is forcing surrounding countries to follow suit.

For example, earlier this year, it was announced that the number of stores accepting Alipay in Japan would double to 45,000. That’s solely to accommodate Chinese tourists. And Alipay is gaining a foothold among Japanese consumers as a result.

You also can’t ignore that Alipay encourages people to invest by linking to the online money market fund Yu’e bao. With its near 4% interest rate and Alipay’s help, Yu’e bao became the largest money market fund in the world in April.

All of this is really just the beginning.

Chinese mobile payments are expected to quadruple over the next four years. Even today, the only thing a Chinese consumer needs to get around is a smartphone – not a wallet or cash.

The downside is that Alibaba, Tencent and the Chinese government have a treasure trove of personal data on every consumer.

Globally, the mobile payments market is expected to surge at a compound annual growth rate of 20.3%.

In the U.S., I wouldn’t say cash is king. But it’s still kicking.

But those who fear a cashless society don’t have to worry just yet. In the U.S., the Federal Reserve reports that money in circulation continues to grow. In fact, the number of U.S. banknotes has increased from 25.6 billion in 2005 to 39.8 billion this year.

To be fair, the U.S. also still mints pennies at a loss every year.

That could soon change.

China and other countries with less developed financial systems can much more easily embrace mobile payments.

The same is true for highly developed countries with small populations, such as Denmark, Finland and Sweden.

Those European countries are home to cities that are the most digitally mature in the world. Mobile payments and digital transactions are king. Cash is rapidly on the way out and may soon disappear altogether.

We Americans may love our dollar bills… but we might not be far behind. 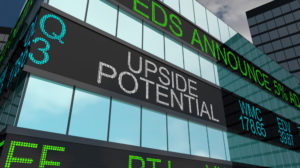