Technical trading patterns come in all shapes and sizes. And they can occur over various time periods. Each pattern features a set of characteristics that makes it unique. And, despite the similarities of some pattern families, there are indicators that govern how to trade them all.

To capitalize on technical trading patterns, traders need to get familiar with what they look like, how they behave and what their significance is to investor sentiment. Is it a bullish or bearish trend? A continuation or a reversal pattern? What features define the pattern and what do they say about the security itself? Here’s a rundown of the most common trading patterns and what makes them unique. 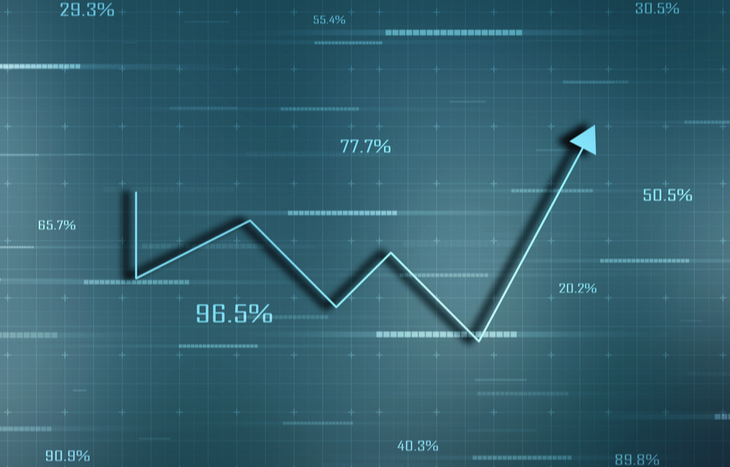 These patterns break out when the price breaks the resistance line. Breakouts tend to mimic the prevailing trend. However, breakouts can occur in either direction. To identify an ascending triangle, look for an underlying ABCD pattern that’s occurring up and to the right. An increase in volume after the narrowing signals the breakout.

The opposite of an ascending triangle, descending triangles are bearish. They have a relatively horizontal support line with a falling resistance slope and break out when the price breaches support.

They’re used to determine entry and exit times for short positions, and they signal that demand for a security is falling. Like in its ascending counterpart, traders should look for an underlying ABCD pattern that forms the triangle, with narrowing volume as support and resistance trendlines converge.

Like all triangles, expect a drop in trading volume as support and resistance levels get closer and closer together. This signals a relative balance between supply and demand. And the resulting breakout could go either way.

Wedges can signal a reversal or a continuation, depending on which level they break first. Wedges can take between 10 and 50 trading periods to establish and require definitive convergence from support and resistance lines. Like triangles, wedges are also marked by a reduction in trading volume as the pattern goes on.

These patterns feature an uptrend that consolidates over time. They’re horizontal patterns, where the length of the consolidation determines whether each one is a flag or pennant.

They’re in the same family as triangles and wedges. However, as continuation trends, they’re a bit easier to predict. Bullish flags have a strong run-up, followed by a slight downtrend and then an upward breakout. Bearing flags are the opposite. Flags and pennants can manifest by themselves or as part of a larger pattern, like a butterfly or Gartley.

A reversal pattern, bump and run patterns are the result of aggressive speculation. The stock price will ramp up slowly, then shoot up to a new high before aggressively falling back below the initial breakout price. It’s characterized by an uptrend that’s as much as 50% steeper than the lead-in trend.

Traders should look for the “bump” and play the “run,” expecting the price to quickly peak before plummeting. These patterns manifest intraday or over the course of a few trading sessions. Often, the resulting price drop occurs much more quickly than the formation.

This pattern is a series of three peaks, with the middle peak higher than the two on either side of it, which have relatively similar levels. This reversal pattern tends to indicate the end of a bullish run.

Look for a clear support level between the peaks, described as the “neckline.” The pattern ends on the regression of price from the last peak as it falls below the neckline. Investors can expect a long fall for the price – often to roughly the inverse height of the “head” peak. Play the head and shoulders pattern just below the breakout.

A bearish-to-bullish reversal trend, double bottoms feature a bottoming-out of price. Moreover, there’s a resistance spike that retreats back to the established support before a bullish run above the resistance level. It looks like a “W” on the stock chart.

Double bottoms tend to occur with profit taking, when the security price becomes undervalued. A rush to buy causes the spike and another sell-off. The price falls again before going on a run back up to proper valuation.

The opposite of a double bottom, a double top tends to highlight a bullish-to-bearish reversal. The price peaks, retreats to a support level, peaks again, then falls below support. The pattern has a clear “M” shape.

When the price is unable to break the resistance level on its second attempt, investors perceive weakness and the ensuing sell-off causes it to fall back below support levels. The regression in price is often more than the peaks it falls from. Enter a position as the downtrend of the second spike breaks the resistance of the trough between them.

A bullish reversal pattern that sees three distinct bottoms at a similar level before a breakout that breaches the resistance peak to run upward. It’s often preceded by a downtrend with a support neckline that signifies the breakout resistance level.

It’s important to look at the troughs to ensure they’re relatively aligned; if the middle trough is lower, it’s an inverse head and shoulders pattern. Triple bottoms signal that bullish investors have taken over the pricing action by establishing clear support.

The opposite of a triple bottom, the triple top is a bearish reversal pattern that features an uptrend, three peaks and a sharp fall below support after the third peak. It signals the inability of a price to break resistance after testing it several times, which leads to the reversal.

Like with a triple bottom, investors need to align the resistance levels – if the middle peak is higher, it’s a head and shoulders pattern. This pattern tends to break out with a price target that’s the height of the pattern subtracted from the breakout point.

This is a bullish continuation pattern that’s marked by a rounded bottom (cup), followed by a bearish retracement (handle) before a breakout run. It’s one of the simplest patterns to recognize and a healthy sign for the security.

Cup and handle patterns occur when the price peaks and sees selling pressure. The rounded bottom indicates profit taking, followed by new investment, which pushes the stock back to its recent high. The handle is an attempt to form new support. Lower volume quickly ramps up into a run upward.

A variation on the cup and handle pattern, rounding bottoms don’t typically see the “handle” action of a new support level. Instead, the price continues to rise far above the previous established high.

A continuation pattern, price channels are effectively a repetition of ABCD patterns over a bullish, bearish or horizontal channel. In any channel, support and resistance trend in the same manner, without breaking out. It tends to signal healthy supply and demand.

When price channels do break out, it’s typically in a continuation pattern, with a large run in the direction of the channel. Unlike a triangle or wedge, channels show consistent volume and trading action throughout the formation, without convergence from the support and resistance trendlines.

Get Familiar With Technical Trading Patterns

Understanding patterns can provide invaluable insight for an investor. But not everyone has the time to analyze the data. The experts at Trade of the Day do the research for you and provide the latest stock trends. And the best part is… you can sign up for this free daily e-letter below.

This isn’t a complete list of all technical trading patterns. Advanced patterns include the likes of butterflies and bats, as well as Gartley patterns and harmonic retracements. Get familiar with these beginner patterns as you test your technical ability before moving on to more advanced trading strategies.