Things are heating up with gaming stocks as companies fight to gain control of the potential +$300B video game market. In fact, TTWO stock is trending higher today as investors look to capture the next big move.

A week ago, the video game maker announced it was acquiring Zynga, a leader in mobile gaming. Evidently, the news didn’t sit well with investors as TTWO stock dropped 8% after the release.

Yet Take-Two is leading the market the past two days after another massive deal shook the industry. Microsoft (Nasdaq: MSFT) is buying Activision Blizzard (Nasdaq: ATVI) in an all-cash deal worth $68.7 billion. With this in mind, the agreement comes as gaming is entering a new era.

With categories like esports and VR blowing up in popularity, Take-Two has a huge opportunity ahead of it. Keep reading to learn why the company is trending and what to expect from TTWO stock. 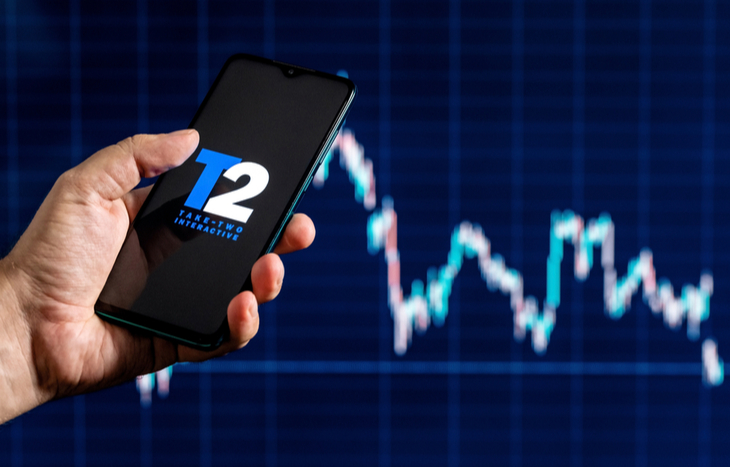 The Zynga Deal Is Huge News

Mobile gaming is one of the fastest-growing segments, with over 6 billion smartphone users globally. And few know mobile gaming better than Zynga.

The mobile game developer is best known for its hit games such as:

But Zynga also has a knack for turning trends into games. For example, Harry Potter: Puzzles and Spells has a 4.8-star rating on both Google and Apple app stores with almost 850,000 reviews.

Even more, Zynga is planning to launch Star Wars: Hunters later this year. The movie franchise has made over $10 billion at the box office so far, making it one of the highest-grossing films of all time. That said, the game will be available on Nintendo Switch as well as the Google and Apple stores.

If the two can successfully marry the technology and bring these hit titles to mobile, it could spark new growth. With this in mind, mobile-only makes up 8% of TTWO stocks net products sold currently. The other segments, including PC (17%) and console (75%), make up the majority.

Having said that, traditional console gaming is an inferior business model compared to mobile. Not only is the mobile market expanding quicker, but it also generates more consistent revenue.

What This Means for TTWO Stock

Although TTWO stock is down over 20% from its all-time high of $214 per share, volume is picking up significantly. Since announcing the Zynga news, share prices are seeing higher relative volume as buyers step in.

At the same time, gaming stocks are getting more attention now, with Microsoft buying out Activision Blizzard. With big expectations for the growing metaverse, gaming will play a vital role in the future of entertainment. Or, at least the big tech companies like Meta (Nasdaq: FB) and Microsoft seem to think so.

One reason for this can be thanks to more consistent revenue models. In the metaverse, many of the key features will be subscription-based. Likewise, advertising contributes to a good portion of total revenue in mobile gaming.

In Zynga’s latest earnings report, advertising revenue contributed to almost 20% of sales. What’s more, the company’s ad revenue doubled from last year after the company’s key purchase of Chartboost in August. Chartboost is an in-app ad platform allowing users to monetize their content.

Do you see where this is going?

Take-Two is known for its inconsistent revenue, making it hard for investors to see the long-term growth potential. If the company can integrate the technology, it may create more stable growth.

On top of this, Zynga is already growing at a rapid pace. Its top line has increased at an annual rate of over 40% for the past eight quarters.

Entertainment is constantly evolving. We are seeing it before us as gaming becomes more immersive with the growth in AR/VR. Hence the VR market is set to expand from less than $5 billion in 2021 to over $12 billion by 2024.

Several games from TTWO seem to fit the VR/AR mold that so many users are attracted to. For instance, Take-Two’s first-person shooters like GTA and Red Dead are two of the best-selling games of all time.

Furthermore, the growth in esports also presents an opportunity for TTWO stock. There will be an estimated 29.6 million monthly esports viewers this year. That said, TTWO owns 2K, the video game mastermind behind the NBA 2K series.

Rivals like EA (Nasdaq: EA) and Sony (NYSE: SONY) are growing quickly as they expand into higher-growth areas. EA is already seeing success in mobile gaming, with revenue growing 34% in the segment. And Sony is planning to expand PlayStation mobile.

TTWO Stock Forecast: What to Expect Next

The pandemic accelerated the growth in the video game industry as users looked for other ways to spend their time. Video game stocks blew up as a result. Lately, however, we are seeing a different story.

At the same time, many tech stocks are down with the broader market. Don’t let this discourage you from investing in them.

The video game industry is one of the fastest-growing markets. In fact, it’s bigger than global sports, music and the movie industry, according to Statista. As you can see, there is money in the video game market. As the industry evolves, there will be even more opportunities.

Despite TTWO stock being 20% off its highs, the fallout is more the result of the market cooling off. Video games are only going to grow with more money-making opportunities.

Furthermore, Take-Two is making a strong push for recurring revenue. If the move is successful, TTWO stock should continue seeing growth.

And lastly, with rival Activision Blizzard being bought out, will Take-Two be next? The Activision deal is worth $68.7 billion, while TTWO sits at just over $19 billion.

Either way, it will be fun to watch TTWO stock over the next few years to see what it can do with Zynga’s abilities.