What is a Bull Trap?

Pattern traders are always looking for signals to help them enter or exit positions. Within the context of a pattern, bearish or bullish signals dictate how a trader might act based on the expectations for future price behavior. Yet, these signals aren’t always set in stone and sometimes, they’re downright misleading. Traders need to avoid false signals, like bull traps.

Bull traps tend to appear in bear markets. They take the form of short-term price rallies that crop up during downtrends. Traders typically believe these rallies are the start of a new uptrend. However, therein lies the trap. The rally doesn’t last and, instead, the downtrend continues.

Avoiding bull traps means understanding how to recognize them. Here’s a closer look at these false signals, how to spot them and when you need to beware of them. 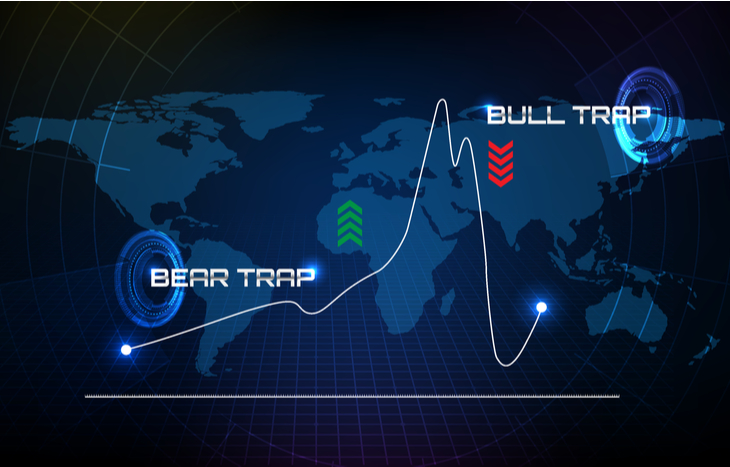 Behind The Scenes: How Bull Traps Form

Bull traps are the product of trader psychology in action. Because they occur in a bear market, investor sentiment is more conservative. Sellers have control and buyers are looking for opportunities to take control, and this struggle can force a bull trap. Here’s a closer look at how one might form:

The culmination of this pattern is a bearish continuation. While the rally might last for several periods, ultimately, it’ll continue to decline below the support level established with the bull trap.

Trader psychology is one thing, but what does a bull trap actually look like within the context of a stock chart? While the intensity of traps varies depending on the strength of the trend, there are a few clear technical indicators to watch out for:

There are several other signals that might become apparent in a bull trap, including a doji star to mark the reversal. Also, increasingly lower trading volumes leading into the peak of the rally can signal an impending reversal and continuation of the greater bearish pattern. Ultimately, traders can be sure of a bull trap if the rally fails to exceed a previously established breakout support level.

Why Is It Called A Bull Trap?

Looking closer at the psychology of the bull trap, it’s easy to see how it gets its name. The price rally appears to signal a bullish reversal, which invites bullish investors to open positions and expect price appreciation. However, because the rally is only temporary, bulls become trapped in their positions when the price suddenly falls back into the bearish pattern. Opening a long position in a bull trap can leave investors holding the bag as the price plummets again.

How Traders Can Navigate Bull Traps

There are two approaches to dealing with bull traps, depending on whether you have an open position or are seeking to capitalize on a suspected reversal.

Traders who find themselves trapped in the bull trap should exit the position as quickly as possible, losses notwithstanding. In some cases, short-term price appreciation can result in minor profit. In any case, it’s important to exit the position before the full extent of the reversal. Stop-loss orders are a smart approach here, and can help traders hang in for the duration of the rally before it falls back into a downtrend.

For those who don’t have positions open in a bull trap, there are opportunities to profit on the short-term volatility. Small bull call spreads during the rally are great for mitigating risk while still controlling profits. On the flip side, bear puts can bring in profits on the downtrend. These options strategies are both safer than buying the underlying security at a time when market volatility is unpredictable and investor sentiment is uncertain.

Bull traps are tricky situations because they’re prone to strong investor sentiment. It’s easy to get wrapped up in the momentum of the market, especially when there’s FOMO involved. In other situations, technical signals may betray investors, as a false signal. In any case, traders who find themselves in bull traps often don’t realize it because market signals feed into cognitive bias.

Bull traps can be devastating for those who jump at the chance to ride the price up after downtrend. Eagerness to jump on the swell could quickly turn into a loss when the price tumbles back down. Bull traps are a cautionary tale for investors to both protect themselves against false signals within a pattern and to open positions with safeguards in place, in case they need to exit quickly.