Some high-risk stocks carry more danger than others. That doesn’t mean they aren’t worth investing. Or at least looking into and watching. Often, high-risk stocks are penny stocks. But often, as you’re about to see, that’s not true.

High-risk stocks need to be heeded with caution. There could be any number of things that make it high-risk. And, when I say that, I mean that there’s a good chance you could lose your investment.

You don’t need to be afraid of this, though. Just be aware of it. Because it’s also very likely your reward will far outweigh your risk.

Know that it’s your duty to yourself to figure out why that stock is high-risk. And it could be natural volatility. It could be a penny stock. Or, it could be that there’s bad news surrounding the stock. Any of these will contribute to the risk.

There are many other possible contributing factors, too. So, do your best to find out what these are. Then, weigh your options and decide for yourself. 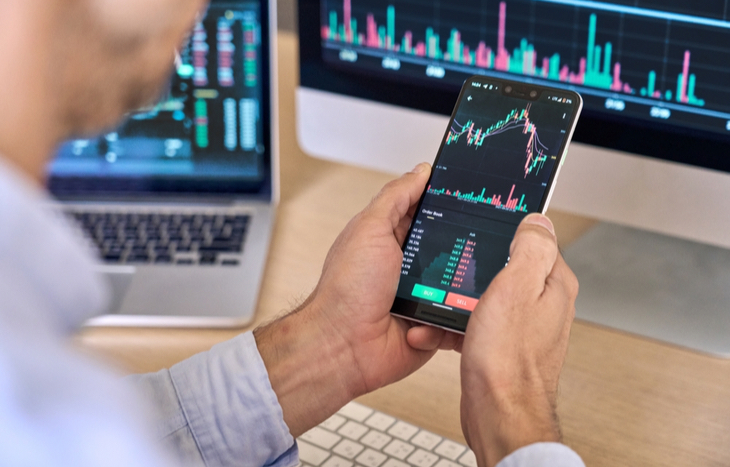 This high-risk stock recently saw a nice peak followed by a big downward correction. And it fell to record lows. Now, it’s beginning to come back up.

There were recent news that Chinese users were having trouble accessing their app. That could be a big contribution to the fall.

But, as Roblox has grown into what it is today, they will likely correct it and move on.

Pinterest users have been leaving the platform like crazy in the past few months. We aren’t talking about a few thousand. We’re talking dozens of millions of users left. At least 24 million and counting.

Pinterest is blaming it on the reopening of physical stores. But, it could be any number of factors. The stock is very cheap now. And it could be a great opportunity to buy this high-risk stock.

Tesla is having supply chain issues. Since they have gone through so much success in the past, it’s likely this will be temporary. But, it’s still a problem. The stock came down by 11% after recent earning were announced.

But, like I said, this issue won’t last forever. And it’s run by a creative mind named Elon Musk. I’m not saying he can’t fail. But, I am saying that it’s likely Tesla will figure out how to make it work.

We love our pets. And this high-risk stock has capitalized on that. Bark gives users a subscription called a BarkBox. Every month, subscribers get new and fun surprises, food and toys for their pets.

The company also offers other products and services. And it’s done well the past few years.

But, Bark recently began offering stock. At the end of 2020, it listed. And its price has only gone down. But it’s common for recently listed stock to come down. And, it listed at a less-than-opportune time. That is, with the economy down.

Bark, Inc. could surprise us soon. If it hangs in there and/or comes up with another competitive edge? It could reverse the bear.

StoneCo’s price was doing very well until about a year ago. Now, it’s hit all-time lows. This high-risk stock is a bit “on the rocks” so to speak. I’m a bit unsure about where it’s headed.

Apparently, profits are not coming to light. And, it’s becoming more and more expensive for them to bring in customers.

That makes sense for the beginning of most companies. But eventually, profit needs to be made. As such, stock price has reflected that. So, it’s a bit of a toss-up on whether StoneCo will come back to life or not.

Dutch Bros is a direct competitor to Starbucks. While Starbucks caters first to an older crowd, Dutch Bros. focuses on acquiring millennial customers. And this is their edge. This high-risk stock has big plans, too. It aims to install 4,000 shops around the U.S.

This high-risk stock is going through some growing pains, though. It has had amazing profits in the beginning. Now, it’s a company valued over $9 billion.

And investors are being scared off by rising interest rates and other factors. So, the stock plummeted quite a bit. And that presents an amazing opportunity to get it cheap.

Why Invest In High-Risk Stocks?

High-risk stocks usually have something a little off about them. And, they’re just like buying a slightly damaged product. You can get these high-risk stocks at a discount. That little “something” that mars the stock or company could prove to be a blessing in disguise.

But, you need to learn why the company is high risk. And further, you need to know if it’s “just a scratch.” Or will it impair the function of the business?

If it isn’t something too serious that will severely damage the company or its reputation? This high risk could mean high reward.

How to Identify High-Risk Stocks

Usually, high-risk stocks have some warning signs. These signs include major drops in stock price. But digging even deeper, it helps to identify why that price dropped. This can help you assess whether the stock is a dud or a deal.

Maybe there was an incident with management or their product. Or, maybe the industry has really suffered a downturn the past year or two. It’s possible the company could be refusing to change with the times.

The damage could also come from something good, too. An example of this would be that the company is focusing on rebranding. This is something that could cause some price increase.

But, if they don’t tell anybody about it? It will look like they are going stagnant. And that could also cause a decrease in investor interest.

It helps to have insider information. So, doing in-depth due diligence is rewarded naturally. If you don’t know how to do due diligence, here’s a great post to learn.