This year’s Investment U conference kicked off in partly cloudy San Diego on April 28. The day was commenced by Oxford Club CEO and founder of Investment U, Julia Guth. She opened up the event with an inspiring message on the importance of optimism amidst market chaos.

“You cannot be a successful investor unless you have a certain amount of optimism,” Guth said. And she went on to state that the goal of the conference was to help attendees and those watching the livestream to be able to prepare, protect and position themselves to prosper.

With that, Guth introduced Alexander Green, Chief Investment Strategist of The Oxford Club and Liberty Through Wealth. Green began his talk on “Looking for Nuggets of Gold in a Rocky Market” breaking down some of the bad news plaguing the markets first. He noted:

However, Green was not all doom and gloom. He noted that inflation was likely near its peak. A lot of pent-up demand for experiential spending on travel, dining and entertainment is about to be unleashed.

Furthermore, all of that aforementioned bad news is “priced in” the markets at this point. And bear markets offer a whole lot of buying opportunities. But, he warned, getting into the markets necessitate adhering to battle-tested principles.

To do this, Green also recommended focusing on companies that are recession-resistant. These are specifically companies that can protect their margins and can pass on rising costs to consumers. Also worth noting, Green recommended avoiding intermediate- and long-term bonds, pre-revenue SPACS and cryptocurrency.

The Second Half of the Morning

After Green gave his stock pick recommendations (for attendees only), Brian Zweig of Asset Strategies International. During his talk, Zweig made a compelling case for gold as an inflation-hedging investment. This was hammered home by a surprising stat.

Zweig’s pitch for gold as a sound investment opportunity was followed by a talk from Chief Income Strategist of The Oxford Club, Marc Lichtenfeld. He covered income strategies for these inflationary times.

Lichtenfeld made a powerful argument on the importance of your investments to keep up with inflation. To do this, he recommended looking for perpetual dividend raisers. The key factors here are two-fold. Look for companies that:

While Lichtenfeld did pinpoint three companies that meet his criteria (again, these stocks are for attendees only), he also noted that dividend aristocrats have never had a losing period that lasted 10 years. In fact, the average 10-year return for dividend aristocrats is 269% (14% CARG).

The last income strategy Lichtenfeld highlighted was Series I bonds. He noted that these bonds are tied to the inflation rate. Inflation goes up, and so does the yield on these bonds. In fact, this May, Series I bonds are likely to pay out a 9.6%.

After a brief coffee break, Frank Holmes, CEO and CIO of U.S. Global Investors and Executive Chairman of HIVE Blockchain Technologies took the stage. He addressed several ways that investors can profit from global supply chain issues. Holmes also made a bullish argument for cryptocurrencies.

He was followed by the dynamic duo behind The War Room. Bryan Bottarelli and Karim Rahemtulla outlined their favorite ways to navigate and profit from a down market.

Rahemtulla outlined his fantastic success rate using LEAPS – long-term equity anticipation securities. However, his track record for offering put-selling advice is even better. Bottarelli also noted that he revels in volatile markets. And he’s helped members of his trading service successfully execute 103 trades so far this year – that out of 136 recommendations.

The lunch break was followed by some advice contrary to the morning. Namely, that cash is rapidly disappearing. And historically speaking, we are on the cusp of a big change in the way money changes hands.

The big catalyst behind all of this, according to Manward Press founder Andy Snyder is blockchain technology. And even though values of many cryptocurrencies might be down, adoption is clearly on the rise. And that makes it possible to profit as the monetary revolution takes place. He then offered attendees two tokens he thinks are poised for a major breakout.

Snyder’s discussion of crypto was followed by a presentation from Punit Dhillon, the CEO and Chair, Skye Bioscience. He discussed how his company was leading the way in advancing potential therapeutic benefits of cannabinoids on the leading cause of irreversible blindness: glaucoma.

Dhillon’s medical discussion was followed by a presentation on alternative investments by Keith Jacobsen of the International Coin Alliance. Jacobsen outlined the wild history of several rare coins and the opportunities that new minting practices have offered collectors in the 21st century.

Jacobsen was followed by a discussion about how to maximize generational wealth by Michael J. Parise and John Parise of Cooper Beech Financial. Topics included ways to maximize after-tax returns… In a way to build a long-lasting legacy. 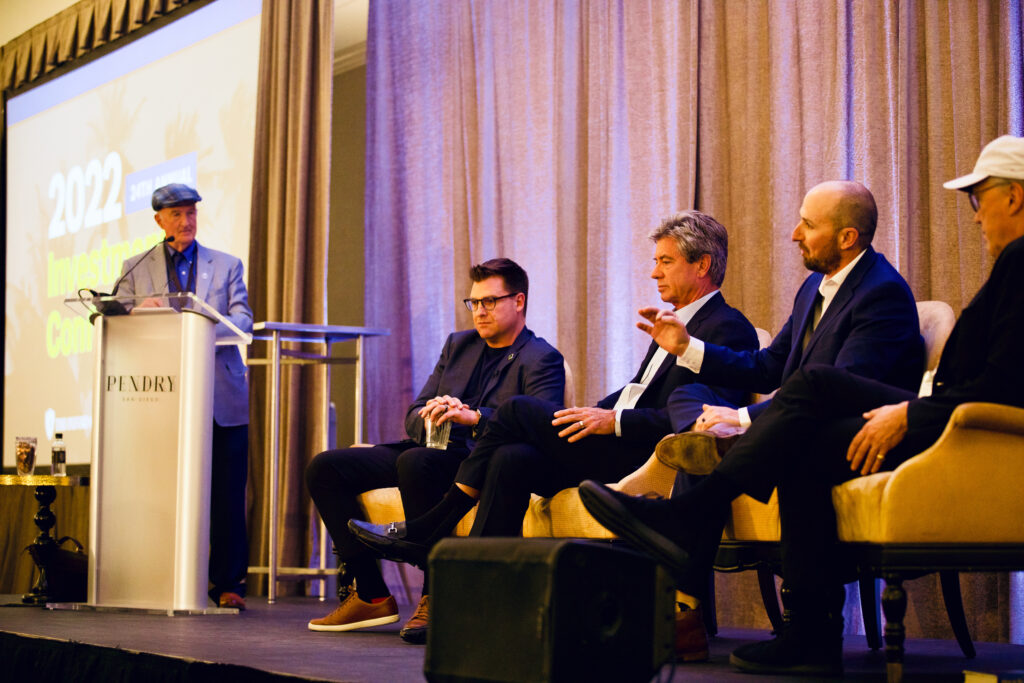 The first day of the Investment U conference was closed out by a panel discussion on one of today’s most misunderstood assets: cryptocurrency. On one side of the aisle were Andy Snyder and Frank Holmes. They stood resolutely on the proponent side of crypto. On the other was Alxander Green and Bryan Bottarelli, who argued against crypto – both of who argued that crypto was in the midst of another bubble.

The rousing debate was moderated by economist Mark Skousen. Holmes and Snyder argued that the underlying blockchain technology behind crypto is not only here to stay, but in a position to revolution industries beyond the financial sector.

And although Green agreed that blockchain technology was here to stay, he simply can’t justify the valuations of major tokens – while noting that Bitcoin is down close to 30% year-to-date. Not only has its price fallen precipitously, it hasn’t proven itself as a reliable hedge against inflation… Something that crypto bulls have long since declared.

At the end of the debate (and day) Skousen polled the audience. He asked by a show of hands how many people had changed their minds on crypto. Of the hundreds of people in the room, both the crypto faithful and skeptics kept their hands firmly by their sides.

So while both sides of those on the panel offered sound reasoning behind their positions, neither were able to sway those on the other side. So maybe – just maybe – this won’t be the last of the great crypto debates at Investment U. And there are many other investment opportunities to consider going forward…