Dictators don’t like cryptocurrency. We’ve seen examples of this in China… And then more of this in China. As India clamps down on critics of its government, it is approaching something like a dictatorship. And it isn’t too keen on crypto either. The latest example of this appears to be an impending Russia crypto ban. 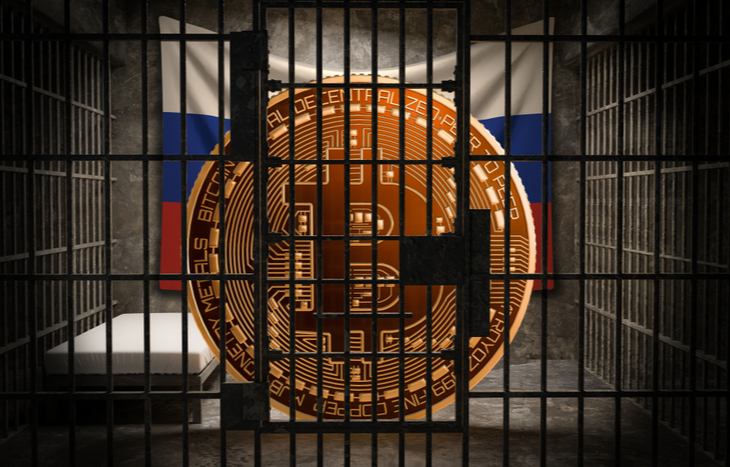 News of the Russia central bank’s move to seek a crypto ban sent the crypto markets downward. In this headline-driven market, any semblance of bad news can be enough to spook investors. And that’s exactly what we have here.

As headlines circulated about the Russia crypto ban, Bitcoin dropped more than 6%. Ethereum fell close to 9%. And Litecoin and Solana saw similar dips.

If you’ve been a crypto investor for more than a couple of weeks, you should know this is far from a sky-is-falling moment. If anything, a single digit price swing should feel quaint. But there is reason to keep a close eye on how this potential Russian crypto ban unfolds.

What We Know So Far About the Russia Crypto Ban

The Russian central bank wants to ban the ability to invest in crypto in Russia. In a statement, the bank cited cryptocurrencies as being a risk to financial stability in the country. This is especially noteworthy because it comes on the heels of Federal Reserve Chairman Jerome Powell saying the exact opposite.

But beyond the two entities not seeing eye-to-eye on crypto, the Russia crypto ban does sound like it’s gaining traction. The Russia central bank’s position is seen as a “complete rejection” of all cryptocurrencies. And it is evidentially in talks with experts about how to unravel a possible ban. We wonder if Chinese President Xi Jinping or Indian Prime Minster Narendra Modi have been consulted yet?

One notable exception to the Russian plan is that it sounds like the proposed law would only prevent future crypto purchases. Any crypto bought before the law is enacted could continue to be held. What’s uncertain is whether it would be legal to sell in the future.

Why This Is Happening Now

Keep in mind, this is merely a hypothesis, but the timeline of a Russia crypto ban does make sense. Realistically, it will probably take a couple of months in order to outline exactly how the central bank will go about taking crypto off investors’ table in Russia.

Merely coincidentally, we’re sure, Russia plans on having a prototype of its digital ruble in early 2022. And it’s no secret that governments – especially dictatorships – don’t like competition. That played no small part in China’s crypto banning efforts. It began to crack down on crypto mining and investing not long after the People’s Bank of China unveiled its digital yuan.

The legislation proposed to ban crypto in India also had a provision that introduced the ability for the Reserve Bank of India to introduce its own digital currency. Shocking, ain’t it? It’s almost as if these governments are following a playbook about consolidating control and power. But of the three countries moving towards a ban, the Russia crypto ban gets top marks so far. That’s just because it looks as though it will ban crypto investing before it introduces a digital currency of its own. And that’s just good dictatoring!

Cryptocurrency is pretty popular in Russia. More Russians are investing in crypto than regular stocks or gold. But it turns out, that’s not saying much. Roughly 11.9% of Russians own some type of crypto. But keep in mind, this includes every kid picking up the latest memecoin.

The highest percentage of crypto holders by far belong to the 25-34 age range. The old money in Russia with the power to actually sway the markets haven’t shown much interest in crypto anyway. So if/when an actual Russia crypto ban goes into effect, we’re likely to see the same effect that took place this week. A fair amount of folks sold the news. Some of them probably live in Russia. And they don’t want an angry Vladimir Putin coming after their crypto wallet.

But for every country banning crypto, there are other counties adopting it at a breakneck pace. In Central and Southern Asia, Latin America and Africa, peer-to-peer payment platforms are more common than centralized banking. Crypto has caught on in a big way in Vietnam, Pakistan and Kenya. In fact, crypto adoption is up 880% in the past year. And of course there’s, El Salvador, which adopted Bitcoin as its preferred denomination. Some major economies like China and Russia backing away from crypto. But growing adoption should be more than enough to offset any long-term downward pressure these bans will have on crypto values.