Skip The Bored Apes, Here Are 11 NFT Stocks To Buy Instead

Non-Fungible Tokens (NFTs) surged into pop culture during 2021. In a matter of weeks, it felt like pictures of apes and pixelated “punks” suddenly dominated the timeline. It didn’t take long for FOMO to set in. Soon, people started spending millions to purchase their own NFTs and discover the best NFT stocks to buy.

In 2020, the total NFT sales volume was just $94.9 million. During 2021, this number skyrocketed to a whopping $24.9 billion. Honestly, it’s possible that we’re witnessing the fastest market expansion ever in history. That’s how big this could be. One way to cash in on this trend is to buy/mint your own NFTs. Another (much easier) way, is to find the best NFT stocks to buy and invest in these companies.

If you need a refresher on Non-Fungible Tokens, check out this article. Otherwise, let’s look at the 11 best NFT stocks to buy. 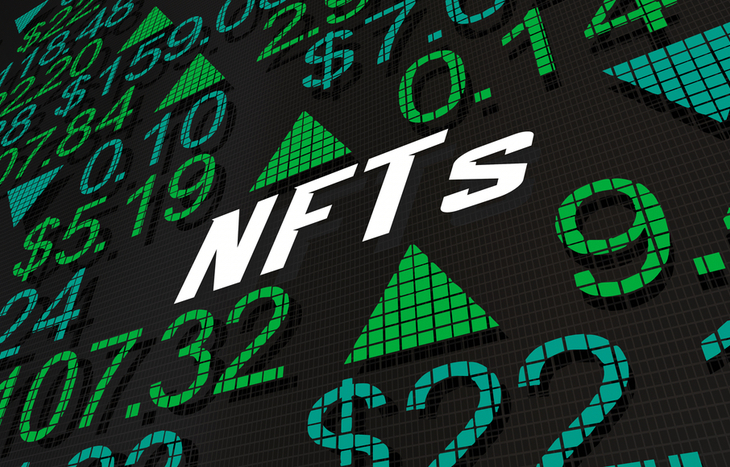 Right now, there is a lot of money chasing a few opportunities in the NFT world. There are just a handful of NFT projects that are considered “blue chip”. Additionally, very few public companies have legitimate exposure to the NFT market. Many companies have made announcements that they are “getting into NFTs”. Unfortunately, most announcements are vague and lack substance. However, there is one company that is already making money off NFTs. More specifically, it’s making money by helping other people make NFTs.

Fiverr is one of the world’s largest freelancer marketplaces. It allows professionals to sell their services to businesses in need. It has dozens of categories that range from “designing a get well soon card” to “create a 10-page website”. Fiverr is constantly adding new categories. By this point, you can probably find someone to do just about anything. This now includes finding someone to make NFTs.

Fiverr is one of the best NFT stocks to buy because it helps other people create NFTs. Right now, practically every business in the world is contemplating launching its own NFT. If they aren’t asking themselves this, they probably will in the next 12 months. When they do, Fiverr’s marketplace is right there to find some help.

Creating a line of NFTs requires unique knowledge. You have to design the collection and understand how the minting process works. You also need to sell them and conduct the transactions. Fiverr professionals can help with each step. For each deal completed, Fiverr collects 20% of the total deal value.

Right now, Fiverr is one of the best pure-play NFT stocks to buy. Another way to cash in on the NFT craze is to invest in stocks that help people buy/sell.

Own the NFT marketplace

Right now, the most popular NFT marketplace is OpenSea. OpenSea will probably go public at some point. However, right now it’s still a private company. Luckily, there are a few public companies that have their own NFT marketplaces.

DraftKings is one of the only public companies with an NFT marketplace. It was able to achieve create a marketplace so quickly by partnering with Tom Brady’s Autograph. Autograph focuses on digital sports collectibles. It has NFTs lines from a few sports legends like Tiger Woods, Simone Biles, Wayne Gretzky and more. In this sense, you can buy/sell Simone Biles autograph NFTs.

So far, DraftKings has been fairly reliant on Autograph. This partnership has gone well and its 70 drops were oversubscribed by 14X. However, it has plans to start minting its own NFTs.

Ebay has long been heralded as one of the best online marketplaces. In recent years, it has been bumped to the side by Amazon (Nasdaq: AMZN). However, eBay recently announced that it will allow people to sell NFTs. This could provide a much-needed pivot to bring eBay back to relevancy. The management team is certainly excited. In their own words, they are “doubling down” in the NFT industry.

In the short-term, only Top-Rated Sellers will be allowed to sell NFTs. After this initial rollout, eBay plans to expand its NFT marketplace based on user feedback. From the announcement, it sounds like it is playing it slow. It’s are starting with a limited rollout. From here, it will get a good idea of what style platform is best.

Remember, in 2021 OpenSea reported $14 billion in transaction volume. For reference, eBay brought in just $10.4 billion in revenue in 2021. This gives you an idea of just how popular NFTs are. If eBay can carve out just a small portion of the market, it could provide a huge boost to its bottom line.

Coinbase has a great case to be one of the best NFT stocks to buy. It launched its NFT market in May, after a two-week beta testing period. However, it only record just under $700,000 in sales during this testing period and the week following.

While these numbers certainly don’t sound bad, its 24-hour volume is over $65 billion. So you might expect slightly more from one of the largest crypto exchanges in the world. However, with the market so saturated with NFTs right now, competition is extremely high.

Coinbase also has another distinct advantage. It is one of the only publicly-traded cryptocurrency companies. This means that its business is already synonymous with cryptocurrency, defi and blockchain. Other companies, like eBay and DraftKings, are not. This top-of-mind-awareness is incredibly valuable. It gives Coinbase a huge advantage when attracting new people that want to buy NFTs.

GameStop is another company that wants to create an NFT marketplace. If it follows through, it could instantly turn GameStop into one of the top NFT stocks to buy. This is all part of GameStop’s desire to rebrand itself. It wants to transition away from its traditional brick-and-mortar retail model. Instead, GameStop wants to become an eCommerce and blockchain company. And NFTs are a huge part of this.

There have been rumors about a GameStop NFT marketplace for months. And it finally beta launched on July 11. With it being such a new release, this NFT marketplace will certainly be one to watch.

Shopify also has an NFT program in beta mode. If you’re not familiar, Shopify is an eCommerce company. It helps merchants easily build online stores. Now, these merchants will be able to sell NFTs directly from their Shopify stores.

As usual, Shopify seems to have taken something hard and made it easy. In the past, it did this with building a website. Now, it’s doing this with minting and selling NFTs. It has partnered with multiple apps that let you mint your NFTs. From there, you can list and sell them in many different ways.

Close to 2 million merchants currently use Shopify’s platform. Just like Coinbase, this gives Shopify a massive audience that it can tap into immediately.

That’s it as far as companies that are building NFT marketplaces. However, there are definitely other good NFT stocks to buy. The following stocks all have a unique thesis. Let’s dive deeper.

Other Potential NFT Stocks to Buy

Funko designs and sells unique pop culture collectibles. As you might have guessed, “pop culture collectibles” and “NFTs” go hand in hand. Unsurprisingly, it has been in the NFT game for a while. Compared to other NFT stocks to buy, Funko is probably the least recognized. This is because the company is mainly tailored for kids. It sells small collectibles of Disney characters, superheroes and Pokémon.

It has had a few NFT drops so far and probably will continue to do so.

Yes, Playboy is still a company. No, it is not just a magazine. Playboy has flown under the radar for most of the 2010s. It just recently went public again in 2021. It is also in the process of transitioning away from its legacy publishing company. Instead, it wants to be known as a lifestyle, apparel and sexual wellness company.

More so than other NFT stocks, Playboy has a great incentive to get into NFTs. This is mainly due to the depth of its archives. Playboy has intellectual property that dates back to the 1960s. And it already started releasing limited NFT drops featuring vintage Playboy art.

Playboy has also already dropped its own line of NFTs, known as Rabbitars. There are plenty of perks to owning a Rabbitar. Specifically, it can give you access to attending real-life events (I.E. Playboy parties).

Just like Playboy, Disney has a unique database of intellectual property. This is part of the reason that it became an instant competitor to Netflix (Nasdaq: NFLX) after releasing Disney+. However, unlike Playboy, Disney has only flirted with NFTs so far. It released a handful of NFTs for the Simpsons, Frozen, and other characters. But it hasn’t given announced concrete plans to go a step further.

With that said, Disney owns the rights to films like Star Wars, Pixar and Marvel. When it does finally make a move, there will be almost unlimited opportunities. This could also include incorporating NFTs in its parks and cruise ships.

AMC released a collection of NFTs along with Spider-Man: No Way Home. This may sound insignificant but AMC received so much traffic that it crashed the site. AMC’s management has also shown that it’s very forward-thinking. It wants to explore all possible opportunities with NFTs, blockchain and cryptocurrency.

Additionally, think of all the opportunities for NFTs along with blockbuster releases. What if NFTs were around for the Harry Potter series? Or The Avengers? Or Star Wars? NFTs could accompany all these releases. They would create an entirely new revenue stream for AMC. In fact, it’s not too hard to imagine a future where AMC makes more money from NFT drops than movies.

I won’t lie, Robinhood is a little bit of a stretch as one of the best NFT stocks to buy. This is because they don’t actually have any formal plans to get into NFTs. They haven’t even announced any tentative plans. However, Robinhood just seems like the perfect fit for an NFT marketplace.

Robinhood is an incredibly popular stock trading app. Just like Coinbase, it allows its members to buy/sell cryptocurrency. However, with just under 30 million members, Robinhood is nearly 3X the size of Coinbase. Additionally, Robinhood’s users skew younger. Coincidentally, younger people are much more interested in NFTs and cryptocurrency. NFTs just seem like such an obvious add-on to what Robinhood already does.

Robinhood’s Crypto COO agrees with this idea. In his own words, he stated that they’d be “silly” to not look into getting into NFTs. If Robinhood announces plans for a marketplace, it could be a huge windfall for the stock. But, as I said, there’s really not much here outside of speculation.

I hope that you’ve found this article on the top 11 NFT stocks to buy valuable! As usual, please base all investment decisions on your own due diligence and risk tolerance.