Why Are Russian Stocks Falling? 4 Things You Need to Know

The war in Ukraine continues disrupting global markets as investors are on edge, waiting for the next move. In particular, Russian stocks are being labeled “un-investable” as sanctions from the west, and E.U. are pressuring the 11th largest economy. That said, I will take an in-depth look to answer the question, why are Russian stocks falling? And I’ll take a closer look at how this can impact financial markets worldwide.

Although the Russian stock market has been closed since February 28, the fallout is being felt in all corners of the market. On top of this, trading on the Moscow Stock Exchange (MOEX: MICEX) will remain closed until at least Wednesday.

With this in mind, the collapse in Russian assets continues, with the nation’s currency (Russian Ruble) losing over 40% since the 28. Even more, the Ruble is at an all-time low, worth less than a penny.

Despite attempts from the Russian government to stabilize the economy, the charts are telling a different story. Having said that, keep reading to learn why are Russian stocks falling and what you need to know going forward. 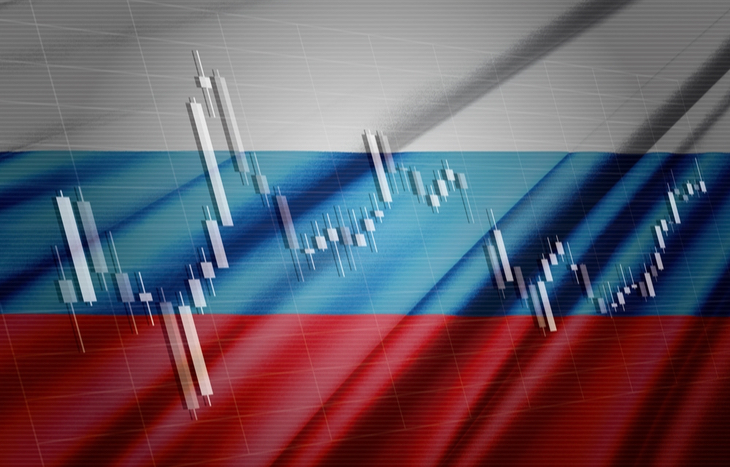 No. 1 Why Are Russian Stocks Falling? Sanctions

Of course, Russian stocks are falling because of sanctions coming from the U.S. and Europe. NATO members and others continue turning up the penalty as the Russian offensive shows no signs of slowing.

The war shows us that financial systems are an integral part of the world we live in. Not only that, but many are learning your money can be someone else’s liability depending on where it’s stored. With this in mind, below is a list of sanctions and what they mean.

As you can see, the world is on edge. And instead of fighting fire with fire, the international community is responding with solutions meant to weaken Russia’s ability to intensify the war.

No. 2 Private Businesses Pulling Out of Russia

Not only are nations responding, but private businesses are also refusing to do service with Russia. In fact, businesses from essentially every industry are taking part in the boycott. If you are questioning why are Russian stocks falling, this is another major reason.

To illustrate, here is a list of major companies pulling their services.

And this is just the start. With this in mind, over 200 companies are withdrawing from Russia, further pressuring the economy.

As many of you are aware, Russia is a significant force in the energy market, particularly coal and oil. Although the U.S. doesn’t rely heavily on Russia for its oil imports, the E.U. does. In fact, Russia supplies close to 40% of Europe’s gas and over 25% of oil.

So far, the NATO nation and allies have stopped short of banning Russian oil because of its effects on energy markets.

Oil prices are already over $120 a barrel, up 50% since the start of 2022. As a result, consumers are paying for it at the pumps. In the U.S., gas prices are nearing record levels over $4 a gallon. Yet in Europe, prices are already in record territory as the war hits close to home.

At the same time, with the war intensifying, the U.S. and E.U. are moving closer to banning Russian oil imports. The U.S. is proposing a bill, but with the E.U. relying heavily on it, it would be a devastating blow.

In light of this, Germany, the largest buyer of Russian gas, is halting the Nord Stream 2 gas project. The project was designed to double gas flow from Russia to Germany.

Why are Russian stocks falling? Keep reading for more info.

Even though the Moscow stock market is still closed, major companies in Russia are feeling pressure. Not only are the sanctions hitting these companies hard, but consumers all over the world are boycotting Russian products.

The war is isolating much of Russia and the companies operating in the nation. The west and E.U. are going as far as targeting Russian oligarchs as an attempt to put further pressure on Russian leader Putin to stop the invasion.

Just when we thought we were getting over the effects of the pandemic, another black swan event happens. These are events out of our control, and as investors, we need to continue taking the best path forward.

So far, we are seeing how the market reacts to war with metals, energy and materials leading the market. On top of this, defensive stocks are outperforming with no end to the war in sight.

Global markets continue to move lower this week, with tension escalating. Despite a bounce in the U.S. stock last week, all sectors are red since the start of the war except energy and utilities.

With this in mind, this is a big difference from the past few years when growth stocks and tech led the market to new highs. If you need help adjusting your portfolio accordingly, check out the best stocks to buy during war.

And lastly, now that you know the answer to why are Russian stocks falling, it’s time to practice risk management. Nobody knows how this will end and how it will affect markets. As can be seen, the situation is not cut and dry and can continue affecting markets. As we advance, keep looking for areas of strength such as materials, metals and commodities.